The mere thought of an animal shelter is enough to make some of us sad. We’re used to seeing those commercials on late night television, with rows and rows of lonely animals, boring holes in our souls with their pitiful eyes. Picturing a shelter typically means picturing unhappiness and misery.

But the shelter in this story flips that image right on its ear, for the whole world to see. The ASPCA decided that it was time for the public to receive a much more positive image than the ones that they were used to and they encouraged shelters to showcase all of the hard work that they’ve done.

They asked shelters that had empty kennels to post pictures of them on Facebook, so that they could receive tons of likes on social media and let people know that there is a lot of good being done out there in the world. Every shelter is not jam packed with sad and sickly animals who have very little hope for survival, as many shelters have successfully found homes for every single animal that resides there.

Thanks to uplifting moments like these, people are able to receive visual confirmation of all the good that’s been done. Shelters are not merely the last stop for stray animals before they are put to sleep for good, they are a stepping stone to a better life. Without the help of these shelters, the streets would be overrun with mangy, flea infested creatures, animals with no hope for the future. 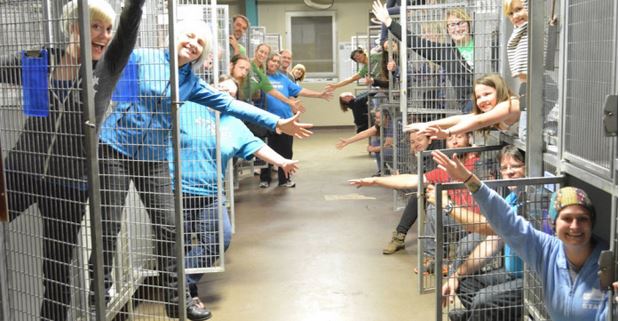 The KC Pet Project was especially successful, as they were able to find homes for a whopping 166 animals, in the month of October alone. Can you believe it? If not, the included image will serve as the moment when your disbelief is permanently suspended. This is an amazing accomplishment, one that deserves tons of shares and likes on social media.

If you can’t believe your eyes, just imagine the sense of pride that these workers feel, as they watch all of their hard work start to pay dividends. Moments like these have to be tremendously rewarding to those who are on the front lines each day.

While animals are being admitted into shelters at a rate that far exceeds the pace at which they can be adopted, images like the one above provide us with hope that every animal will one day be able to find a home to call their very own. Please share away, everyone.