A spiral notebook filled with pages and pages of instructions addressed to the new owner of his dog named Rhino Lightning, written by a heartbroken child, after his dog was surrendered to a shelter ended with,

“Please tell Rhino that I love and miss him every night.” 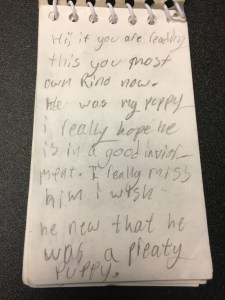 Just one week ago, the three-year-old adorable brindle Boxer was surrendered to the Humane Society of Utah. The family had adopted the sweet dog six months ago, but the energetic pooch proved too rambunctious for the family with several small children and would unintentionally knock them down while playing. Maybe he wasn’t the best fit for the family, but nevertheless one young child was so saddened he wanted to make sure the dog’s new family knew all about him; and in a good way:

“Hi, if you are reading this you must own Rino now. He was my puppy. I really hope he is in a good inviorment. (sic) I really miss him. I wish he new (sic) that he was a preaty (sic) puppy…Please tell my ‘striped dream’ that love him and miss him every night.

Also included were the child’s observations about Rhino slobbering, loving cuddles as well as loving to sleep under the blankets. The child warned the dog’s new family not to give him tennis balls because he chews them up, doesn’t like the snow and in the summer is not a fan of swimming. Also Rhino doesn’t like cats, but he is “honestly just adorable.” 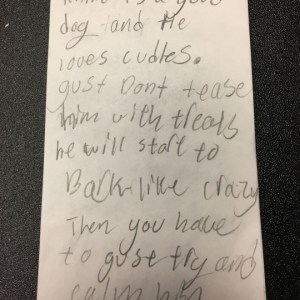 The Humane Society of Utah is looking for a new home for Rhino. Because he is a lively guy, children in the home should be at least eight-years-old. (Fill out an adoption application, if you’d like to be considered.)  According to the shelter, Rhino is a bit nervous in his kennel, but does fine when he is outside and able to romp around. He is house-trained and has a special liking for peanut butter.

On the organization’s Facebook page on Sunday, Rhino was scheduled to have a “meet and greet” with an interested family, but on Monday morning, his adoption photo stating he is still available for a lucky family remains on the website.  (updated at 10:55 p.m.) Please share Rhino’s story with friends, family and social media contacts. Sharing saves lives.

(Photo of Rhino described by heartbroken child courtesy of Humane Society of Utah.)