Hope For Paws received a call about a homeless dog who’d never had any human contact. They knew capturing him would be tricky but necessary to his survival. Wait until you see the dog that’s underneath all of that fur. This is Benji’s rescue and transformation as told by the rescuer himself:

“BENJI was a homeless dog his whole life. When Hope For Paws received the call about him, I asked Lisa Chiarelli to join me. Benji was very nervous, and when he realized that we were looking at him, he started running, and we started running after him! It was a little tricky because I had to keep an eye on him while running, and at the same time I had to set up my gentle snare AND keep my hand held camera straight – you’ll just have to see how I managed all that ;-)” 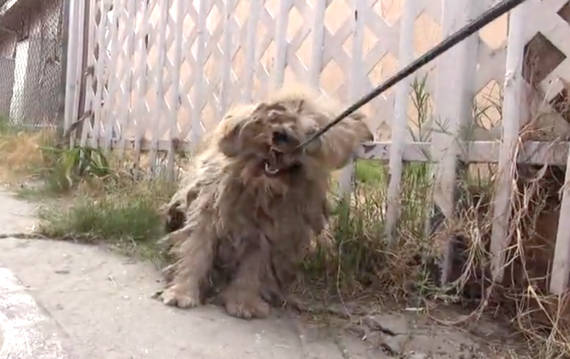 “After Lisa and I secured Benji, we got to take a close look him. Physically: he was so badly matted, covered with ticks and fleas, he bit his tongue as he was struggling to escape from us, so you’ll see a little bleeding – nothing serious. Mentally: Benji was living on the streets all his life, so human contact was so hard for him to get used to. After a 2 or 3 hours of grooming and medical care, he continued to Lisa Chiarelli’s house where for 10 days he almost didn’t move… frozen, always looking for a place to hide, and not wanting anyone to touch him. As usual, Lisa’s Pit Bull mixes – Lola and Frankie, decided to help Benji overcome his fears, and the result will make you so happy!!!”