Coco and Blackie were two dogs who spent their lives chained in a backyard in Bowman, Georgia.  They couldn’t even keep each other company since the owners chained them far apart from each other and placed their dog houses facing opposite direction.

And to further add to their misery, their family, who lived in the mobile home on the property, would often ignore them and forget to feed them. Their neighbors Lynit Patterson-Sallions and her friend Steve McDonald would often take food to the dogs and give them some attention and affection for which they were also starved. This went on for years until one day, the family moved out of the mobile home and left the dogs abandoned on the property in early October 2018.

Lynit and Steve were very concerned that the dogs would be discovered by the landlord, and the local animal control would be called. Because there is no actual animal shelter in Bowman, the dogs would have been euthanized immediately. Lynit and Steve could not take the dogs in, as they already have many rescue dogs living in their home. Lynit put out a plea on Facebook for a rescue to take Coco and Blackie, but due to two recent hurricanes in the southeast, rescues were full of abandoned dogs.

Lynit had no choice but to put them in boarding at Gordon Vet Hospital in Gordon, Georgia.

According to Lynit, Coco is a brown and white male approximately 5-6-years old  and a real sweetheart. He is house trained and gets along with other dogs and cats. He also gets along with skunks and had one living in his dog house with him. They used to cuddle up to stay warm. Blackie is a 3-4-year-old male. He’s fine with people and very sweet and affectionate with Lynit.

Unfortunately, almost five months have come and gone since they were placed in boarding and still no rescue has come forward.

Lynit must remove them from boarding. They have been there too long.  However, the catch is; she cannot take them home until the $640 balance for the boarding is paid. The facility is giving her only four days to come up with the money or they are going to charge her with abandonment, and the dogs will be relinquished to animal control where they will most likely be euthanized. 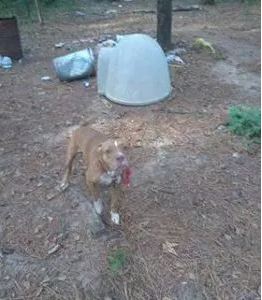 It is an extremely urgent situation for Coco and Blackie.  They have already been wronged twice; first by being made to live at the end of a chain nor even able to socialize with each other. The same people who made them live like that also abandoned them as if they were garbage; not caring at all what could happen to them. If it weren’t for Steve and Lynit, these dogs would have starved.

Lynit and the Steve, the heroes in all of this have also been wronged. They took the dogs in at everyone’s urging, and for a while money was going into the GoFundMe  to pay the boarding. That soon ended, and Lynit and Steve had to continue to pay out of their own pockets. Now they are stuck with the $640 balance owed. It seems like they are being punished for doing a good deed.

Please donate to the GoFundMe. The $640 needed to pay the boarding bill must be received in 4 days.