Murat Sahin may be the very definition of good Samaritan.  Every day, without fail, Sahin gets on an old motorbike and drives through the forest of Aydos in Istanbul, Turkey feeding every and any stray animal he comes across.  It’s one of the most important things he does all day, as just in that little area he has over 100 dogs relying on him for a good meal.

Sahin says that that his mission is very important to him as well.  In fact, he says it’s his spiritual calling in life.  To provide for the forgotten and unwanted.  He is 100% devoted to each and ever animal he helps.

He even does his best to help with containing the seemingly overabundance of strays in need of help.  He occasionally gets to take a few in to a doctor for helath checkups and such, and he’s even been able to get a few of them spayed of neutered.  However, this isn’t always possible as many of these animals are more wild or feral in nature.

“Murat has never asked for any help,” said Anna Efe, a fellow volunteer.  “He has always used his own money and collected food a restaurant and a local canteen. Also, some butchers were giving him leftovers free of charge.  But this year the situation has changed.  The butchers stopped giving leftovers for free and, on top of that, Murat’s old motorbike was stolen.  It was his only way to deliver food to the forest dogs.” 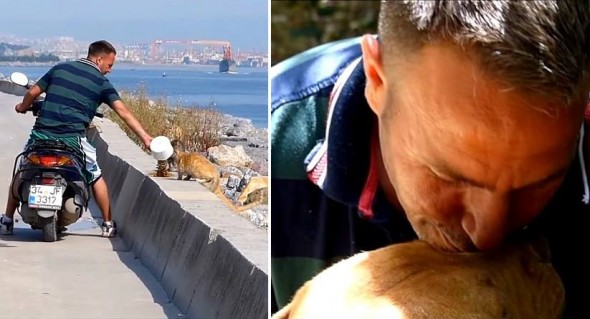 Sahin was able to replace the stolen bike with a very cheap one.  It’s a bit beat up and has some issues now and again, but it would seem as long as he can complete his daily mission, he is totally fine with it.  However, the poor guy had the thing straight up die on him almost immediately after filming the video shared with this article.

All is not lost, however.  The Harmony Fund, a charity out of the United States has a surprise in store for our hero here.  They are in the process of raising funds to get him a car!  It makes sense, too.  On the days when there’s poor weather he’ll have shelter, and he’ll also be able to carry more food around in an actual car.

This is where you, our dear and wonderful readers come in.  Please, we know it’s very close to the holiday season and there’s pretty much nowhere in this world where money isn’t an issue for a good number of folks.  We totally understand that.  However, we do ask that if it’s something that you can fit into your budget, click here to make a donation.  We can think of no more worthy cause than this man, and the really important, vital work he does.  We thank you very much in advance for your consideration and generosity.  We know that we have the best readers, and you guys and gals won’t let us down!