It was New Year’s Eve, and Bob, a Michigan man, headed outside to grab another log for his fire. It was a routine task, except that Bob slipped and fell, badly injuring his neck. He couldn’t move. And there was no one there to assist him.

Except for Kelsey, that was.

“Kelsey was licking him and barking at him and pawing at him,” said Bob’s daughter Jenny told WKRN. “I can see marks on his arm from her pawing at him.” 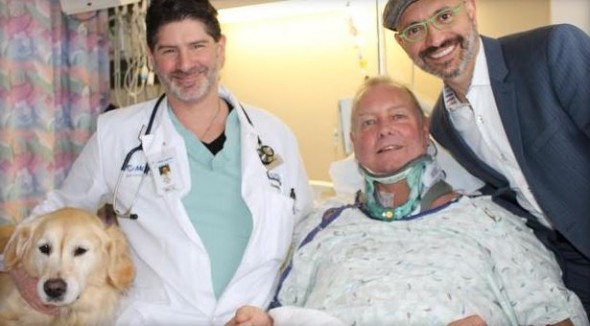 What’s more, Kelsey stayed with her beloved human for an astonishing 20 hours, even after he lost consciousness, until a neighbor came over to find Bob lying in the snow.

“The last thing he remembers saying is telling Kelsey that he was so sorry, that he tried as hard as he could to stay alive,” Jenny said. “He wasn’t sure by the end, he remembers losing consciousness and kind of putting his head to the side and saying ‘ I gave it all I could give it’ and that was it. We think about one hour later is when Rick came and found him.”.

Bob was brought to the hospital and immediately prepped for neurosurgery. Dr. Chaim Colen (pictured all the way to the right) was his attending physician.

“I don’t think he would be living unless the dog were there,” Colen told reporters. “The dog kept him warm. The dog kept his extremities warm. He didn’t have any frostbite and it was 24 degrees that night.”

After a successful surgery, Bob and Kelsey were reunited.

“He was right out of surgery and she licked his face and they were crying and it was beautiful,” Jenny said. “It was everything that you would think the reunion would be.”