In Lima, Peru, a young woman became a dog’s hero after she jumped into the train tracks to save the pet from getting run over by a train. However, her heroic actions will now be penalized and the woman will have to pay fees for breaking the law. 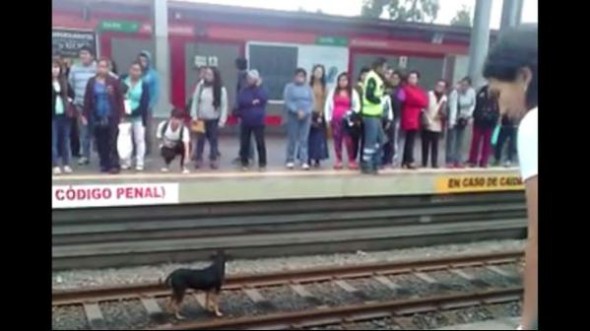 According to local reports, the dog entered the train station with his owner even though the pet was not a service dog. The companion pet accidentally fell over the edge and landed in the tracks, and because of the height of the train’s platform, the dog was unable to jump out on his own.

In a video posted on YouTube by user Ray Ramos, we can see how train security responded to the incident. The video shows a guard using a two-way radio to communicate with other train employees to secure the area. We also hear an announcement in Spanish asking commuters to not attempt a rescue and let train personnel take control of the situation. There are visible signs on the platform informing people that anyone who jumps over the tracks will be penalized, but even though steps are being taken by authorized personnel, commuters grow impatient and take matters into their own hands.

The dog’s owner, a woman dressed in red, can be seen calling her dog and trying to catch him while the pet attempts to jump out of the tracks, but a security guard asks her to step away from the edge.

A young woman on the other side of the tracks is concerned about the dog’s life. No one knows for sure if incoming trains have been stopped and all commuters fear the dog will soon die. We can hear the young woman ask if the tracks are electrified and after someone says no, she jumps in, secures the pet and lifts him out of the tracks and into safety. The woman is then helped out of the tracks by the security guard. 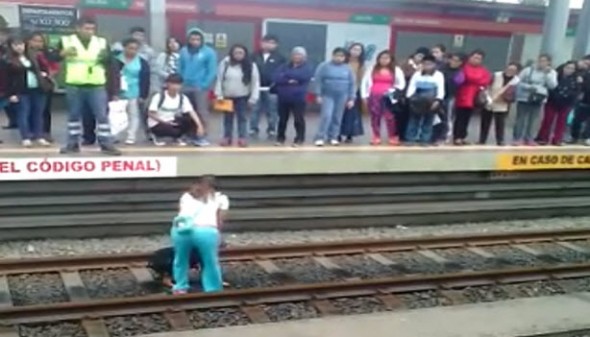 Everyone is relieved the pet and the heroic woman were not harmed. Many say the woman was very courageous and her actions were what saved the pet. However, the metro line is penalizing the young hero for violating the law.

The metro line says that for the safety of everyone, the woman and all other commuters had to step back and allow authorized personnel to secure the train line first and then they would attempt a rescue. However, witnesses say train authorities did not respond on time and that’s why they stepped in.

Local animal lovers are now criticizing the metro line and the legal systems for penalizing the heroic woman for doing what they were afraid to do – risk their lives for the live of a dog.