A toddler who had been sick was lying down when she began vomiting, causing her to choke. Her mom was asleep in another room, so were it not for the puppy they had just begun fostering, Betsy would not have survived. 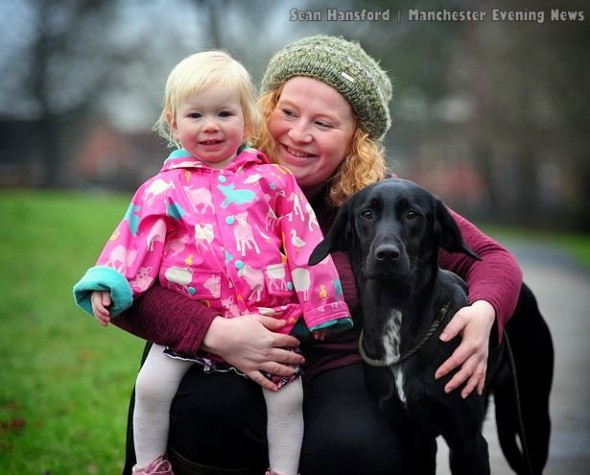 The Macclesfield, UK mom was exhausted after staying up all night with 21-month-old Betsy, who was fighting off a stomach bug.  Emily Gunnion had finally been able to doze for a bit when she was startled awake by the sound of 9-month-old Rufus’ barking.

“I was so tired after being up with her and didn’t know what was going on. Rufus alerted me. He got half on the bed and was scratching at me and barking. I knew something was wrong,” she explained to the Manchester Evening News.

“Betsy was lying on her back being sick and choking, making horrible noises.  I was so panicked but picked her up and she was sick properly and was okay.” 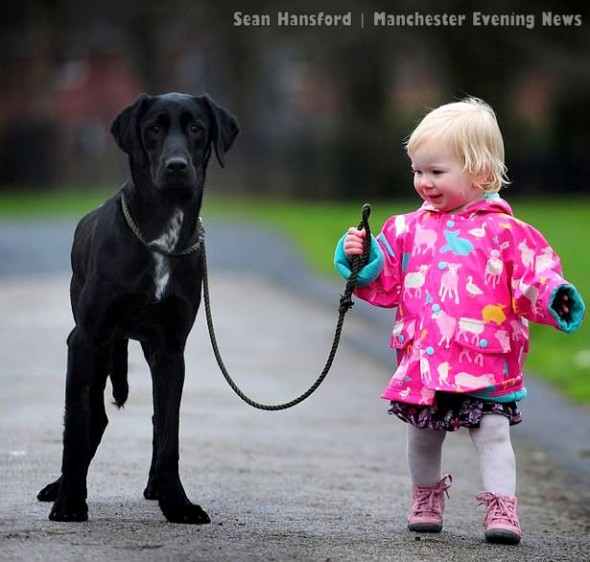 And miraculously, Rufus, a Labrador-Springer Spaniel mix (Springador), had only been there for a few days.  Emily already has two dogs, and volunteered to be a foster home for the group Labradors in Need, which finds permanent homes for Labs and mixes.  Though she has volunteered for a while, this was the first dog she’d fostered.

“Rufus is so clever, he sensed something was wrong. I dread to think what would have happened if he hadn’t been there,” Emily said.  “Rufus feels like part of the family already and I’d love to keep him but I have two dogs and can’t really. I really hope he finds a nice home.”

She notes that his leg had been once been broken, but hadn’t healed properly, leading to be deformed.  But this doesn’t stop him from being active, as he’s very happy and playful.

“He and Betsy are best of friends but we will have to let him go to his forever home,” said Emily.  “Labradors in Need is a fantastic charity and there are lots of things people can do to help. Fostering dogs is such a worthwhile thing to do. Rufus has shown how amazing rescue dogs can be.”