Donald C. Copps had been watching his friend’s dog when he and his buddies went golfing in Naples, Florida.  The dog, Carbon, decided to go for a swim, but unbeknownst to the entire party, a gator had been lurking nearby, and decided to make the dog its lunch.  Without thinking, Copps dove right in and saved Carbon before he was too badly injured.

Carbon’s parents have gone to see the world on a months-long cruise, and entrusted their beloved dog into Copps’ care.  He had to put his own dog down last year, and was eager to have another around for a while.  But he went above and beyond, putting his own life in great peril when the adventurous dog nearly took his last swim.

A few weeks ago, Copps was golfing in Olde Cypress with friends Brian and Yuliya Vail when Carbon tired of chasing golf balls and jumped into one of the many ponds in the wetlands of Florida.  What he didn’t realize was that a seven-foot alligator had begun swimming towards him.  Though Carbon is a competitive dock jumper, his skills were no match for the expert predator. 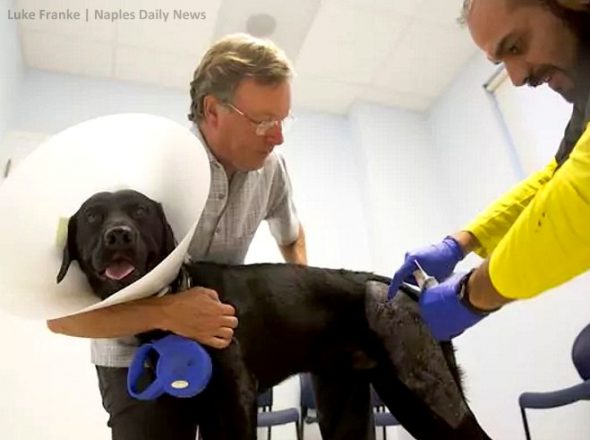 Copps and crew saw what was about to happen, so he leaped in the water and started splashing around.  The Vails also made a ruckus, hoping it would be enough to distract the gator.  It had bitten Carbon on the thigh, but it seems their commotion was successful, as the reptile was deterred just long enough for Carbon to escape.

“By the time I gathered my senses, the dog was out of the water and I’m in it up to my chest, just feet from the gator,” Copps told the Naples Daily News.

He slowly backed away, and went to inspect Carbon, who had sustained a number of puncture wounds and long lacerations.

“He was crying, yelping,” Copps said. “I put him on a golf cart, went home to change my wet clothes and took him to an ER. He was spooked. We all were.” 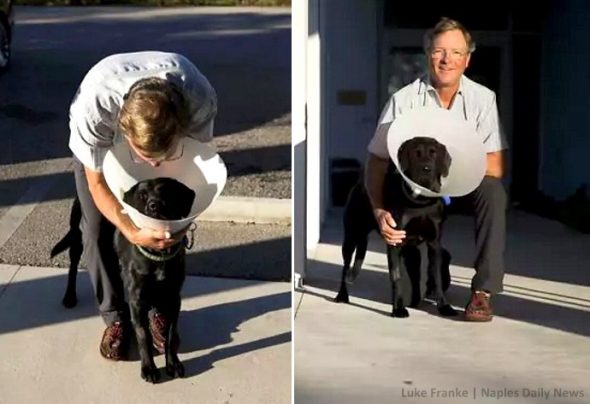 Carbon was treated for his injuries, and drainage tubes were inserted into his leg to prevent fluid from accumulating.

“The dog was really lucky,” said veterinarian Lon Miyahira.  “When I hear alligator bite or attack, I expect worse. It’s hard to recommend jumping into the water, but it’s probably why the dog was not badly injured.”

A week after his injury (and once the cone was off), Carbon was back to his old self, romping around and jumping on the bed.

“I think most people would freeze,” said Yuliya Vail of Copps.  “He jumped in. I thought it was heroic of him. That gator could’ve drowned Carbon. We could have watched him die.”

It’s difficult to say what anyone would do when faced with that situation.  Copps isn’t entirely convinced he would do it again.  When asked if he would jump in for his wife, he said, “Maybe. Depends on what kind of day we’re having.”