Anthony Rogers is a man who lives with very few material possessions. Even though he is what many people would consider being poor, he feels that he is very rich when it comes to love in his life.

Like many people, Rogers has seen better days. He is an artist from Tennessee and is struggling as a homeless individual but that doesn’t mean he is doing so alone. He has a dog named Bobo sticking loyally by his side. Rogers does everything he can to make sure that his beloved dog never goes without but when Rogers woke up a few weeks ago, he found himself alone.

Bobo was now missing and Rogers began searching high and low for his beloved dog. He made flyers and hoped that somebody would spot the dog but as the days went by, he became afraid he would never see him again.

Last week, however, an employee at Memphis Animal Services saw the flyers and noticed a new pup that had just arrived at the shelter. She contacted Rogers, who went to check and see for himself. The reunion will touch your heart.

“It was a very cool moment to see such unfiltered, unrestrained joy,” Katie Pemberton, spokesperson for the shelter, told The Dodo. “I think we all felt really lucky to be able to witness it. Working in animal sheltering can be very difficult emotionally, so seeing something so happy is like gas in the tank for us.”

Bobo and Rogers were thrilled to be back with each other again. 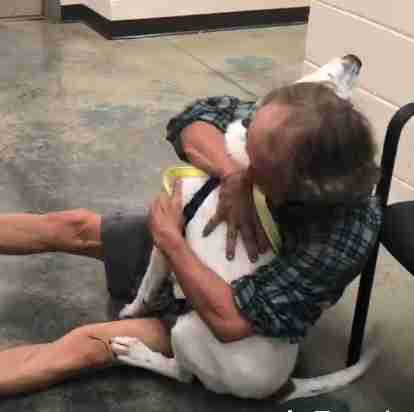 Rogers is still homeless and hopefully, he will get his life in order but until that day, you can be sure that he will be taking care of his beloved dog and providing everything he needs.

“Bobo got neutered, microchipped and vaccinated, and we found out he was heartworm negative,” Memphis Animal Services wrote. “We sent him back to Anthony with a year’s supply of heartworm prevention, a bag of dog food, and a harness, leash, collar, and ID tag. Bobo is healthy and happy[.]”