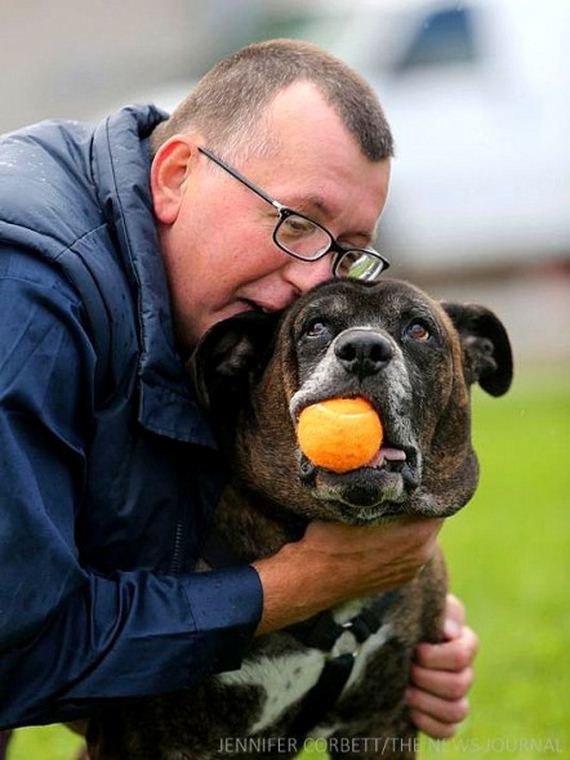 Pete Buchmann is homeless in Delaware, and knows that the best thing he can do for his senior dog is keep him in a shelter.  It is heartbreaking to be away from Buster, so every day – rain, snow, or shine – Pete walks five miles each day to see him so he knows he hasn’t been abandoned.

Pete and Buster were inseparable until this past July when Buchmann’s dwindling resources were drained and he became homeless.

“When I couldn’t pay my rent any more, I moved across the street into the backyard of an empty house,” he told Delaware Online. “I pitched a two-man tent, and it was kind of fun for about a week, but it wasn’t good for Buster.”

He asked police officers where he could take the nine-year-old dog until he was able to care for him again, and was told to contact Faithful Friends Animal Society in Wilmington.  He was unable to call at first, because his cell phone kept dying and no one would let him charge it.  When he finally got through, he told staff whereabouts the pair could be found.

“We drove out and found them,” said Lou Henderson, manager of the shelter’s dog department. “We also took Pete a goodie bag with some food and things in it to help him. We brought Buster back with us and gave him his own room.”

Executive Director Jane Pierantozzi wasn’t thrilled to come into work to see that the shelter’s meet-and-greet area had been turned into a makeshift apartment for Buster, but felt for the dog and his owner.

“Since the financial crisis, so many people have had to give up their pets, and we have been able to place them, but Buster isn’t adoptable,” she said. “He’s old, he has arthritis, and he’s protective of and attached to Pete. Dogs like that can go down fast in a shelter. We knew if he went to a kill shelter he wouldn’t survive.”

Of the 3.5 million homeless people in America, anywhere between 5 and 25 percent of them have pets.  This may be unfair to the animals, particularly when it is scorching hot, freezing cold, rainy, and buggy, but most homeless people will sacrifice their own meals and blankets to keep their pets comfortable.  Pets are all some of these people have, and turning them over to a kill shelter isn’t an option. 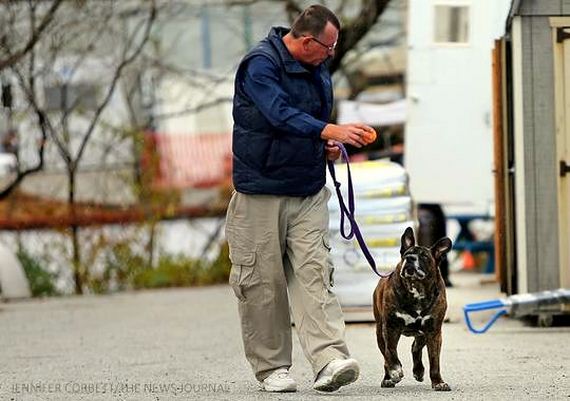 Pete never thought he’d be where he is now, but it can happen to anybody nowadays.  If you lose your job and can’t find another one, money runs out fast, and banks and landlords aren’t usually very forgiving of unfortunate circumstances.  Pete had been installing fiber optics and doing construction, but when the economy declined, so did the work.

“I’m not your stereotypical homeless person,” he said. “I don’t drink, and I don’t do drugs. There are a lot of very smart people living at the mission who are just down on their luck.”

The Long Island native moved to Delaware after his sister and mother, whom he was caring for, died within weeks of one another.  He went where the work was, but that quickly dried up.  He sold his car to keep his apartment, but when the money ran out, he was out on the streets.  He never married and has no children, so he has no one to turn to except Buster, who he visits every day.

“I am just amazed at his attitude,” Pierantozzi said. “He walks two-and-a-half miles each way every day to see Buster, and then he spends two or three hours helping us walk the dogs. Most people in his situation would be depressed and angry, but he isn’t.”

She is so inspired by his fortitude that she is reaching out to everyone she knows, looking for a full-time job for him.  Pete has been working at the shelter, but because it is a non-profit and relies on donations, there is no pay to give him.

“Pete has been so resilient through all his trials,” Pierantozzi noted.  “It’s bad enough to lose your home, but to not know what’s going to happen to your pet is horrible. I just hope there are people out there that can help.”

For now, Pete is just grateful to be able to sleep at the Sunday Breakfast Mission and that Buster is well-cared for.  He hopes they will be reunited permanently soon.

He’s my buddy; he’s been with me through everything.  He seems content here, and he knows now that I’m coming back, that he hasn’t been deserted,” Pete explained.  “Faithful Friends helped me save my faithful friend. I’ll be grateful forever. I have nothing to complain about.” 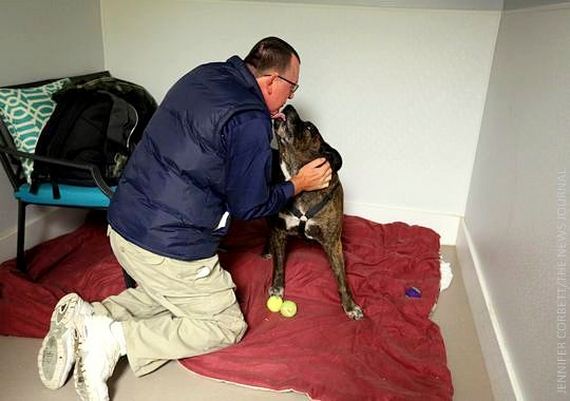