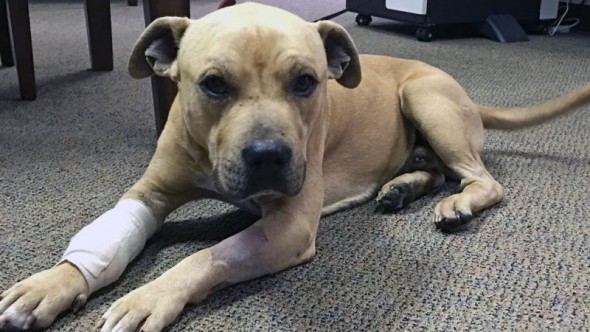 In Meridian, Texas, a local hunter came across a dog caught in a trapper’s snare.  He immediately called for help, and the dog was saved from a terrible fate of freezing or starving to death.  After the dog was rescued from the trap, the man decided to adopt him, making for one happy ending for one lucky dog.

The man called Bosque County Rescue Kennels, or BARK for short, after finding the dog on January 10th.  Volunteers there were told the dog was hopelessly trapped in a snare, and in dire need of help.

BARK is not allowed to go onto private property and pull a rescue, so they called in the park ranger service.  The person answering the call was not only a ranger, but a volunteer member of BARK, and a Texas Parks and Wildlife game warden as well.  Although he was not on the clock that day, he dropped everything he was doing to go and rescue the dog.

The warden met up with the hunter, and he was brought to where the dog had been discovered.  Then the two proceeded to get the dog out of the trap, only to notice that the dog was badly injured by the trap.

They got the dog out of the woods and to an animal clinic as fast as they could.  His front leg was badly damaged in the incident, and the rescuers were informed that the dog may have been trapped in that snare for as long as five days.  They could tell just from the malnourished and dehydrated state the dog was brought in with.

The vet staff took care of the dog’s leg.  They were able to reconstruct it, and they’re saying a full recovery is possible.  However, the dog is not out of the woods yet.  He’ll still need medical attention due to the lack of food and water, and the toll that took on him.  As for now, he is in a foster home for some daily hydrotherapy, and regular bandage changes.

This is not where the story ends, though.  The hunter was so concerned with the fate of the dog, that in the end he inquired about adopting the dog.  It was decided that the hunter’s home and family would be a great fit, and they now lovingly call the dog, “Lucky.”