WITH MAGGOT BURROWED UNDER HER FACE, HEAD AND NECK, THIS POOR DOG IS FIGHTING FOR HER LIFE AT THE ER VET. TAF was called about a dog that had been found behind garbage cans, in an alley, on the south side of Chicago. A concerned citizen brought the dog to an open access shelter that then called us for help. Luckily the shelter manager Diane, who has a heart of gold, met us hallway to the ER Vet and transferred the dog into our care. We have named the dog Antonia and she is around 1-2 years old. Antonia has a fever of over 105 degrees and she is extremely lethargic. 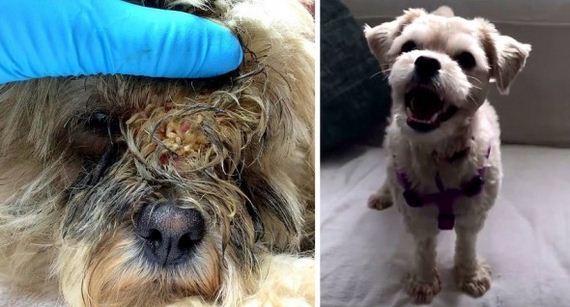 Maggots have burrowed deeply into her face and tunneled through to her neck. However, since the fur on her neck is so badly matted, you cannot see the carnage that lies underneath. You can only see maggots pop out around the edges and through her ear. It is absolutely horrifying and smells of rotten meat. As maggots grow, they begin feeding on a dog’s skin and tissues. They eventually produce a special salivary enzyme that is capable of liquefying intact skin. As the maggots feed, this destructive salivary enzyme actually digests the dog’s skin, creating full-thickness, punched-out skin lesions (sores) within a matter of hours. The maggots move into these cavities. They continue feeding on exposed skin and enlarging the raw openings, creating a perfect environment for severe secondary bacterial skin infections. Some flies can secrete toxic substances into these wounds. If a dog becomes heavily infested with maggots, it can go into shock. In Antonia’s case, the maggots could have also already done irreparable damage to her sinus cavity, ear canals or even brain. 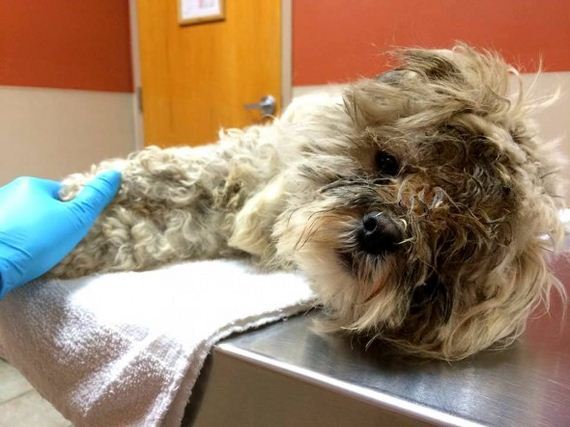 Since Antonia has such a high fever, she is being started on IV fluids immediately. Her medical team will have to do a full blood panel to see if she is stable enough to be put under to shave/cut off her matted fur with a scalpel… it is that hard. Pain medication and antibiotics will also be given through her IV. We won’t know anything more about her condition until her medical team can dig deeper and flush the maggots out. The abuse that this girl has endured is gut wrenching and makes absolutely no sense at all. The lack of morality in some neighborhoods in Chicago seems to progressively be getting worse. God help us all.

September 6th:  TAF transferred Antonia over to our regular vet today. The poor girl is literally dying to scratch and rub her head and face to alleviate the itching, but then her ear is so painful and sore that she can’t lie her head down properly so she just sits and stares in misery. It’s really hard to see. TAF’s vet said she needed to sedate her and really scrub her head and neck clean as infection is already seeding the area, despite the antibiotics. (The brown and red marks on Antonia’s skin are a result of the maggots eating away at her skin.) She will also be looking more deeply/closely into Antonia’s ear (her right one) to figure out what is going on that is so very painful. We want Antonia to get some relief and comfort so she can rest and settle down to begin healing. It’s clear our girl has never had a good day in her life and it’s almost like she has post traumatic stress from the maggots crawling around her poor face, neck and ears. Antonia is now hospitalized.

September 8th:  TAF visited Antonia at the hospital today. She clearly felt better because she was very happy to see us, vocalizing and jumping around. Her ear is much less raw and inflamed though she still tilts her head a bit to that side. Antonia is receiving medication and painkillers twice a day for her ears and has started to fight them less, which we hope is a sign the pain and inflammation are reducing inside the ear as well. Antonia’s head and neck are still very scabby and itchy from where the infection is. The vet staff is applying silver sulfadiazine cream to the raw areas. (Silver sulfadiazine works by stopping the growth of bacteria that may infect an open wound. This helps to decrease the risk of the bacteria spreading to surrounding skin, or to the blood where it can cause a serious blood infection (sepsis)). Antonia will be re-assessed tomorrow to determine the best course of action. We want to be sure her pain and discomfort is completely managed before moving her, and will do whatever it takes to make sure that is possible. Antonia’s medical team can more aggressive with her pain management, than we can, so we are leaving it up to them. 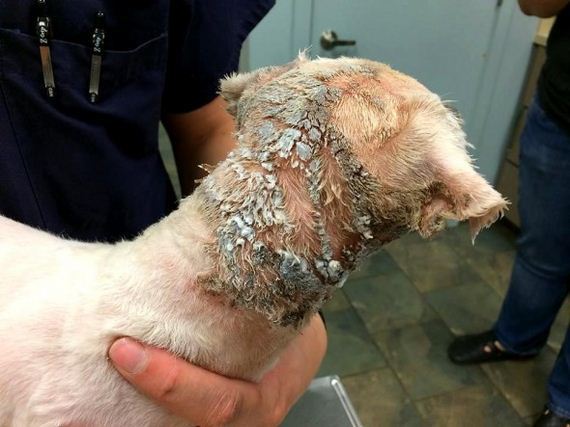 September 22nd:  It has been a couple weeks since Antonia came to us with a maggot infestation on her face, head and neck.  But it was her severe earaches that would cause her excruciating pain. Even after two weeks on ear antibiotics, the infectious bacteria inside her right ear is still present. She is about to start her third round of antibiotic ear drops.

In addition to all of this, almost all of the scabs that covered Antonia’s neck, head and face have fallen off. Her new skin underneath is incredibly sensitive and she is very cautious when you put your hand near her head, face or neck… some of this is also a reaction to the neglect and abuse of her past.

Antonia has gone into heat so it is going to be awhile before she can spayed and ready for adoption. Until then, she will be hanging out with her therapy buddies Antler, Miller and Hazel Grace. As you can see in the photo, Antonia likes to sit with her foster mom Antler. 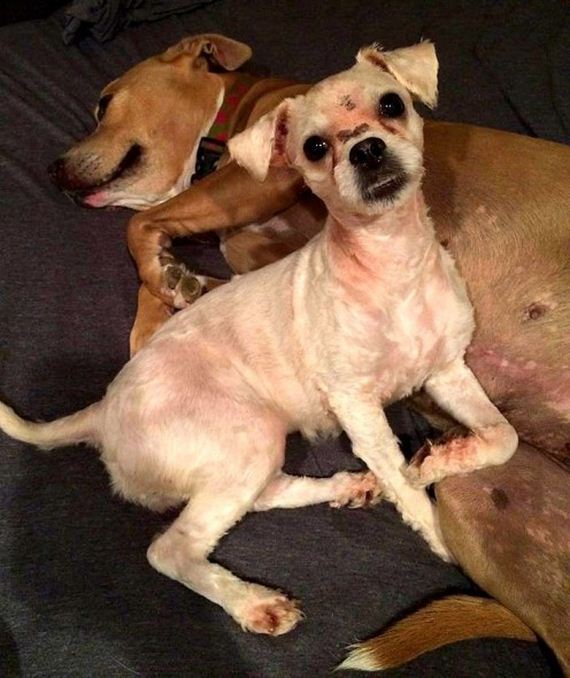 October 12th:  After ER hospitalization and weeks of doctors’ appointments, Antonia went in to have her ears scoped yesterday. We are happy to announce that Antonia’s ears have fully healed and that she was able to be spayed.

As you can imagine, after such neglect, Antonia has been a little shy at times. She has been in a foster home and we have been working with her day and night to build up her confidence. She has made great strides and we are really looking forward to finding her a home that would cater to her needs. 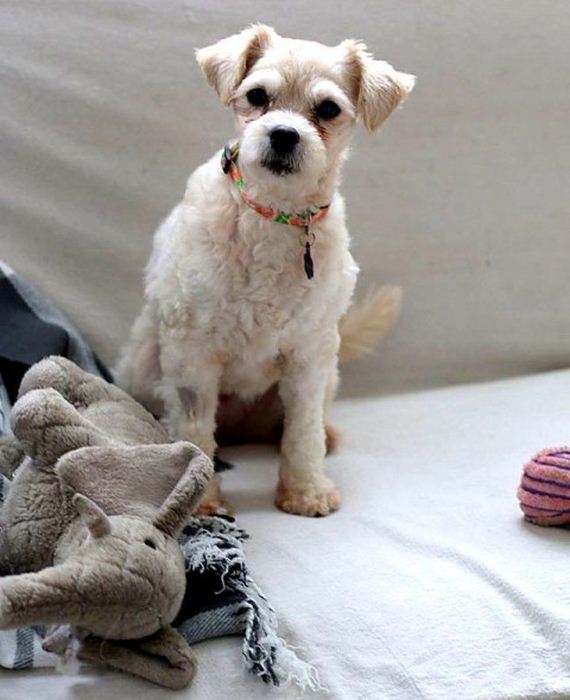 October 20th:  AFTER MANY WEEKS OF RECEIVING MEDICAL CARE, ANTONIA IS NOW READY FOR ADOPTION!

On September 2nd, Antonia was found behind a garbage can in a Chicago alley. Antonia’s face, head and neck were covered in maggots and they were eating away at her skin. As bad as this was, it was the excruciating pain of her raging ear infections that brought Antonia to her knees.  She has now received a clear bill of health and is ready for adoption.

Antonia is a 15-pound, 1-year-old shih tzu/poodle mix who loves to snuggle, hang out and sit on your lap. She is a low maintenance girl who is very friendly and loving, but can take a minute to warm up to people. Antonia would be best in a home where she can be the one and only, or with another very chilled out little dog. She just isn’t sure what to make of other dogs, but seems to enjoy their company. In addition, we believe it best that Antonia not go to a home with young children. As you can imagine, after such neglect, Antonia has been a little hand shy at times and we don’t want to set her up for failure.

If interested in adopting Antonia, please visit our website (www.trioanimalfoundation.org) and click on the adoption icon. There you’ll find information about our adoption program as well as the application