Pete was a 14-year-old senior, an English setter and former hunting dog who had only been with Stephen Parisi and his family (and four other dog siblings) for 18 months. They were good ones, spent running in the woods in a happy-go-lucky manner. 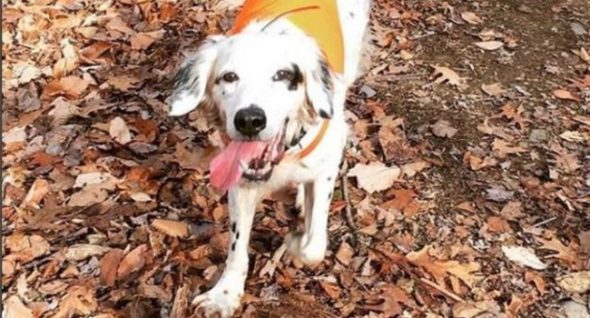 And that’s how his family wants to remember him.

Pete was hiking with Parisi and the other dogs at Monksville Reservoir in New Jersey this past weekend when they came upon a black bear.

It is believed the bear was sheltering and, because of that and the recent rain, was unable to smell them coming and so they surprised it.

Brave Pete held the bear off while Parisi made off with the other dogs, securing them in a safe spot, then returning to shoo the bear.

Parisi’s wife, Cathi Henn, told the BBC: “The bear’s only exit was a 180-degree turn and the bear was never going to turn its back on something that it was scared of, so it came for Stephen and the dogs.”

Sadly, Pete’s injuries were grave, among them a broken back. Parisi, unable to carry his friend, wrapped him in a waterproof coat and dragged him along the ground by its hood for more than a mile before reaching the car. Cathi and a family friend helped take him to Oradell Animal Hospital.

Upon thorough examination, which revealed injuries that would have left him unable to walk again, Parisi and Henn made the decision to let Pete go peacefully and without pain.

Since posting the story on Instagram, Pete has gone viral, with people from all over the world responding and paying tribute. It has been a surprise to the couple, who took Pete in as a foster 18 months ago. He was originally from Ohio, given up by his owner when he became too old to hunt.

“Thanks to everyone who have offered their condolences, I didn’t expect anything like this,” said Henn. “We were just upset about our dog. We are just devastated. All this love for Pete is great but we’d happily trade it for just one more day with him.”

Henn and Parisi said that Pete loved to be the center of attention and would have enjoyed all the fuss.

“Older dogs can give so much love, Pete turned out to be our hero too.”