In Hamden, Connecticut, two dogs, Kato, 8, and Kleo, 7, who have been locked up for more than six years were freed on Wednesday. The unlucky pair of Rottweilers managed to escape from their yard back in 2012, and they attacked a grandmother and her grand daugher. Since then the dogs have been prisoners. 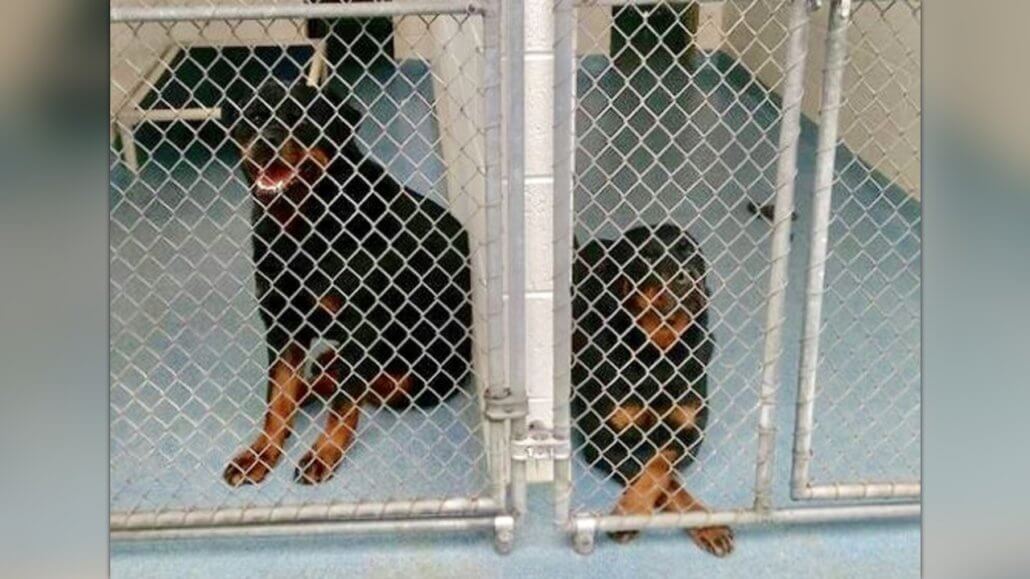 “The child’s grandmother was like a 45-year old woman who came running down and started yelling at the dogs. It was a big deal. The neighbors came, they started beating Kato with baseball bats,” stated one of the advocates for the dogs.

The grandmother, Cynthia Reed, told authorities she heard her granddaughter screaming and ran outside to see the two dogs barking at the child. She kicked and hit the dogs along with other neighbors who struck the dogs with baseball bats.

According to Kim, the dogs attacked only because they were being attacked; neither one had ever bitten or attacked anyone.  She further claimed her side of the story was never taken.

And so the dogs were ordered seized and taken to the North Haven Animal Shelter following the alleged attack, and for the next 6 years have never left on a car ride, a park expedition or slept with their beloved human.  Instead Kato slept on a cold concrete floor; scabs on his body. Tragically, Kato also has cancer.

When the dogs’ story hit the media, animal advocates wanted to get involved and rallied around Kim. Gunbir Gauba started a Facebook page for the dogs to raise awareness. And when animal control and the courts ordered the dogs be put to death, Miller launched an expensive battle to keep her dogs alive. She spent upwards of $50, 000 in court fees and attorneys fighting to bring her dogs home.

Hamden Mayor Kurt Leng announced both dogs had been freed on Wednesday and were being transported to a sanctuary in Florida. Grace Acosta, the founder of Gulfstream Guardian Angels Rottweiler Rescue, will be caring for the dogs.

“I am very pleased to announce that Kato and Kleo, two dogs formerly detained at the North Haven Animal Shelter, are being re-located to a sanctuary facility for animals in Florida. The dogs will live their lives in proper care, surrounded by attentive and loving facility managers. The transfer of the dogs was peacefully completed this morning, providing resolution on all sides between the State, Town and the dogs’ new owner Ms. Miller…,” stated Mayor Leng in a statement.

Video of the dogs leaving:

It was a painful choice for Kim, but she no longer wanted the dogs locked up until they died of disease or old age.

Kato and Kleo continue their journey towards their new home in Florida. We’re going a bit slow with them with frequent long rest breaks with the same set of transport volunteers. Quoting one of the volunteers “Kato and Kleo are amazingly well-behaved and obedient. They were a bit shy and confused at first, seeking reassurance from each other. So much more comfortable now, meltingly sweet, always ready for belly rubs and hugs, sharing their treats and toys. My heart hurts for what Kato and Kleo have endured. I can’t imagine these two big goofs could ever hurt anyone.” 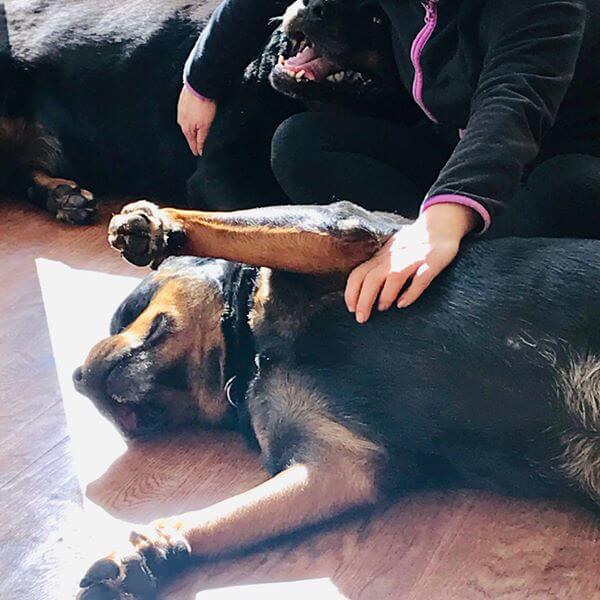