Artist Jenny Jinya made us teary eyed once before with her comic about a very good boy who was sent across the rainbow bridge far earlier than he should have been.

This time, her comic focuses on a black cat who lives outdoors, finding a friend in a kind old woman who feeds her every night.

On one tragic night, a heartless motorist cut the cat’s life short. As she meets death, she asks for one last opportunity to say goodbye to her human friend.

The woman wonders why the black cat had not returned to eat, perhaps having eaten already. 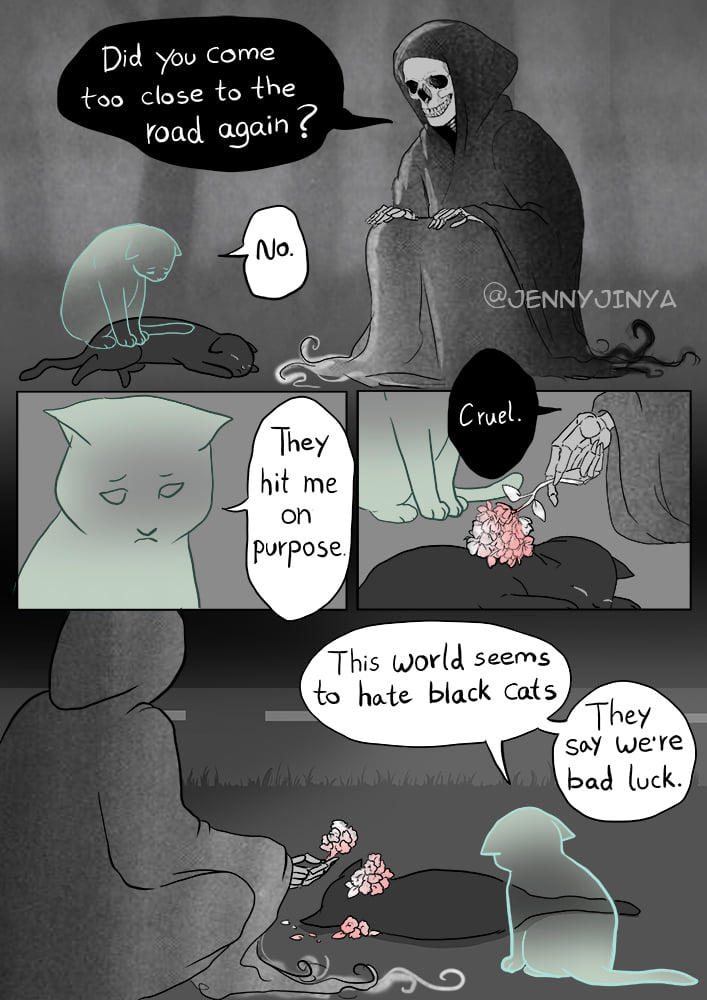 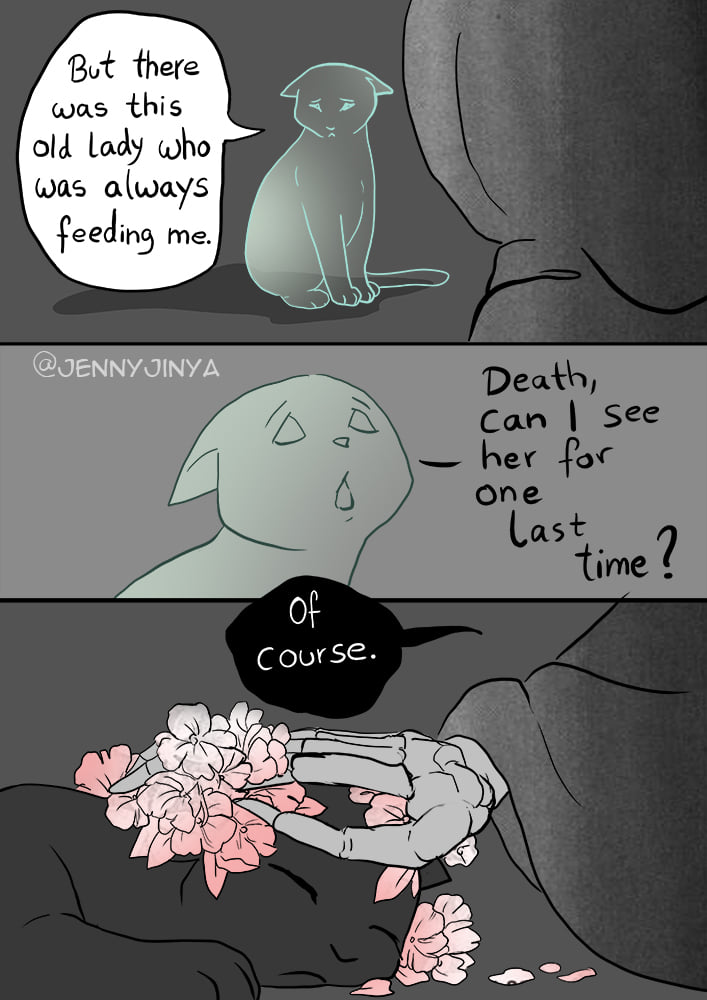 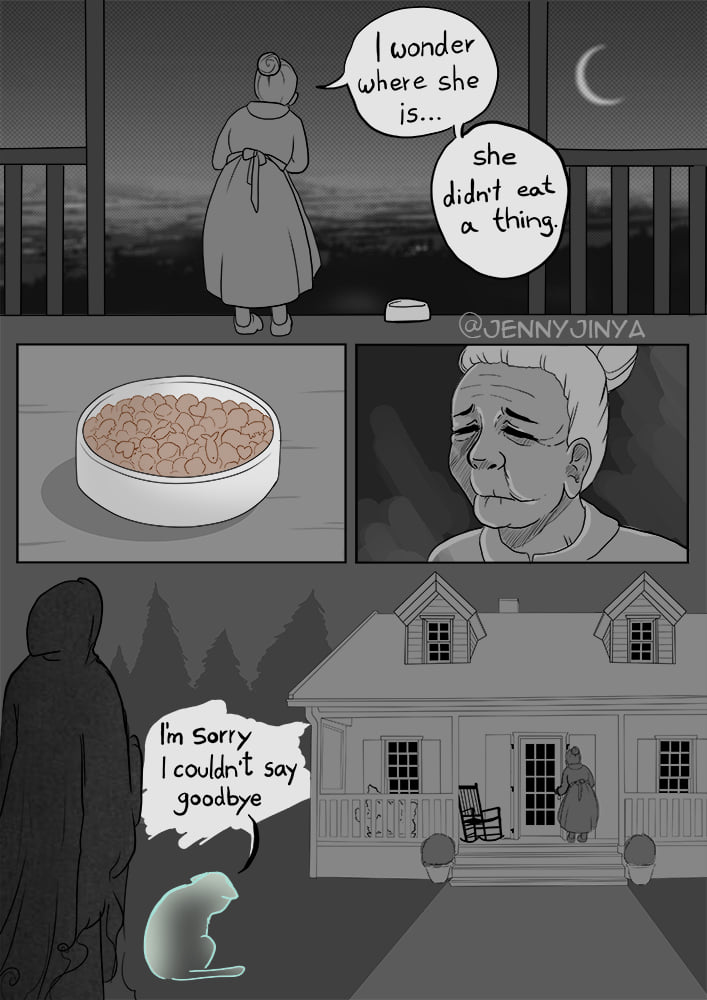 It’s clear to shelters and many readers of the Animal Rescue Site that this tragedy happens all too often to stray and feral cats, especially black cats, so often treated unfairly for a baseless superstition.

“Even in 2019 you still hear of black cats being associated with superstitions, witches, black magic and such. Black shelter pets are less likely to be adopted than pets of other colors. They still face so much hate nowadays and the more I read about this topic, the sadder I get,” Jinya posted to Facebook. 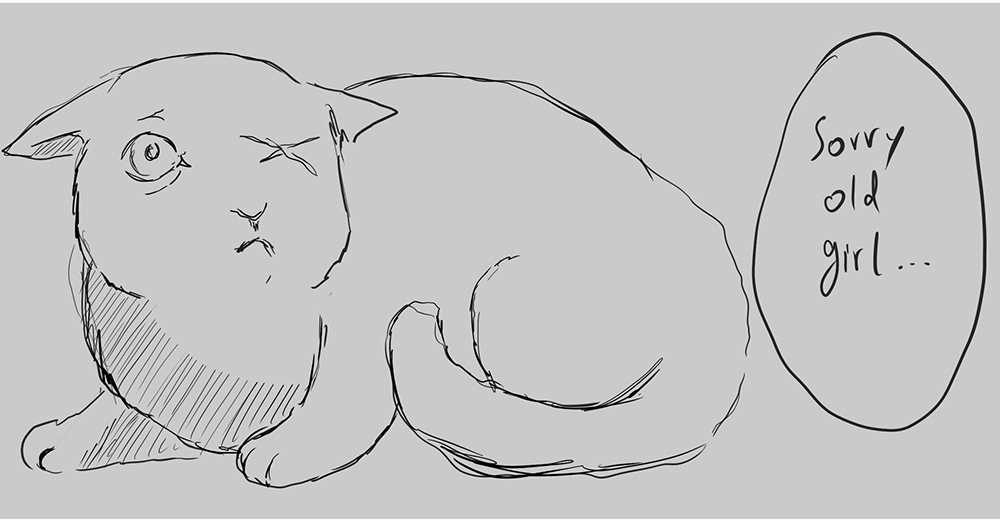 Indeed, black cats more often face a challenge for survival that cuts of other colors do not. A 2002 study in the Journal of Applied Animal Welfare Science, found that black and other dark-colored cats were the least likely to be adopted. And once in shelters, those cats were more likely to euthanized.

“There are dozens of posters and infographics with various statistics about abandoned or abused animals. Many know the problems, but such information is quickly forgotten,” the artist told Bored Panda. “I try to give a voice to the victims with my comics. I want the affected pets to be able to tell their own stories. I hope I can raise awareness this way.”

Jinya says she isn’t sure of the forms death may take, nor is she attempting to press that opinion on others.

“But I like to imagine death as a person who is just doing their job,” she said. “People hate them for what they’re doing, but in the end, someone has to do it. I like to imagine Death to be a gentle and insightful being.”