The Doberman Rescue of North Texas was contacted back in January of 2017 to help Cliff. Cliff was hit by a car and left to die on the side of a highway in East Texas. If it wasn’t for a Good Samaritan who knows what would have happened to him.

Cliff was taken to an orthopedic veterinarian where he underwent surgery to insert plates and a pin into his shattered leg.

After 3 weeks of recuperating at the vet, the Doberman Rescue was able to pick him up. Cliff could not stand and his doctor said the chances of him ever walking again were 5%. The clinic staff loved him but knew that only “tough love” was Cliff’s only shot at beating the odds. Cliff still had a long road ahead and needed a lot of physical therapy.

Cliff has to be carried outside to go to the bathroom but within a few weeks he learned to crawl. When he needed a drink of water or to go out he would softly whine so he could get help.

Cliff started to get stronger and they would find him farther and farther away from where he had been placed. He had to will and drive to explore his new environment.

A few more weeks went by and he learned how to walk while being supported by a sling. He still did not have use of his hind legs but he was not going to give up. 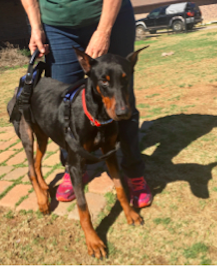 Cliff got stronger and stronger. He started to walk on an underwater treadmill. He showed the classic Doberman spirit and became unstoppable.

Today Cliff has relearned to walk and can even get up unassisted. His bright spirit and determination paid off. He loves to walk around the rescue, checking out his surroundings and playing with his newfound friends. 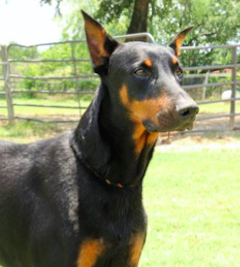