If ever there was a story that promoted the use of life vests on pets, this is it.

Boaters near Hernando Beach, Fla. pulled a tired Jack Russell terrier from the Gulf of Mexico when the little dog — donning a fitted canine life jacket — approached their vessel, likely hoping for rescue. 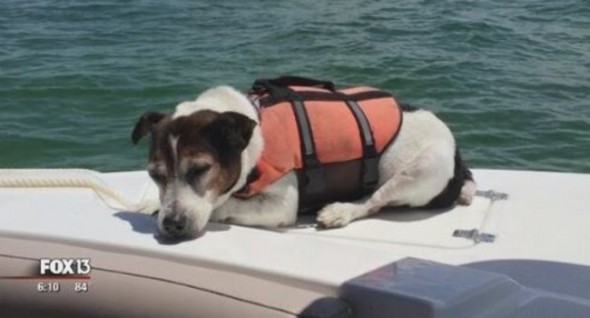 “You just saw his little nose sticking up out of the water,” Shawn Sahr told Tampa Bay Fox affiliate WTVT.

They called the Coast Guard to report the incident and learned that a distraught owner had reported the dog, whose name is Jagermeister, missing three hours earlier. Jager went missing that morning when the man went below deck for a moment.

Rescuers met the terrier’s grateful owner at the Coast Guard station, where he told them he’d given up hope after a lengthy search.

“He had tears,” Sahr told WTVT. “He said, ‘I had given up, I had searched as long as I could and we just couldn’t see him, we just thought we lost him,’”

A happy ending for an exhausted pooch and his human. And a reminder to water- and dog-lovers as boat season approaches: they don’t call them life preservers for nothing.