The Carson Shelter in California is a high-kill facility. And it was as though Blue King (Blue for short) knew it when he found himself locked inside one of its kennels, immersed in the stressed, frightened fray of dozens of other condemned dogs. He wouldn’t eat, not even treats. He just sat there sadly with a thousand-yard stare that spoke volumes to his feelings of abandonment.

A photo that shows a tear dripping from the corner of his eye (likely due to allergies) seemed to capture his situation — and that of innumerable other pit bulls — perfectly.

Blue had lived with his family for about a year when they decided to move. With no plans to take Blue with them he was surrendered at the shelter in January. And the longer he stayed there, the higher his chances of being euthanized. But when volunteers from Saving Carson Shelter Dogs saw his sad, teary face, they knew they had to help him. 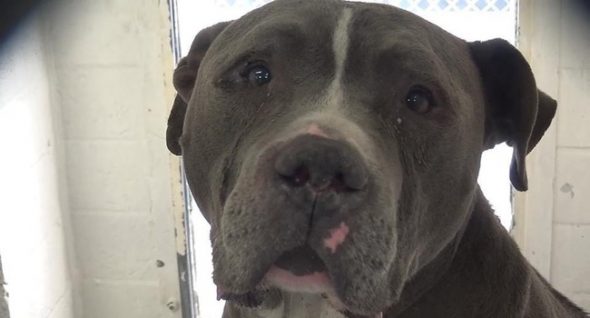 They took a video (see above) and shared it on their Facebook page. And that’s what inspired Jennifer McKay to go see him at the shelter.

“He looked very sad and depressed,” McKay told The Dodo. “He wouldn’t even acknowledge me at all. All the other dogs were making eye contact and wagging their tails, but he wouldn’t stand up, wouldn’t come see me. It was sad.”

She watched his face and movements and it seemed as though he was waiting for the family who left him to come back.

“You could tell that every time someone walked by, it was like he was looking for them,” she said. “It’s like he knew he had been left there.” 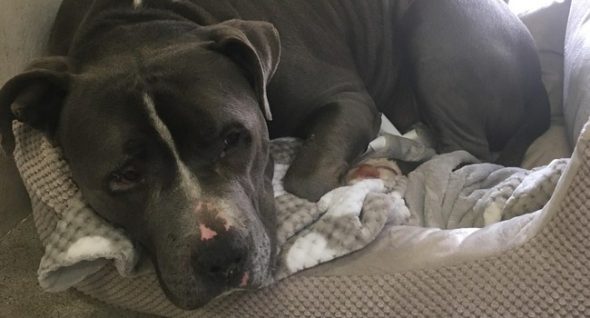 McKay would have taken Blue right away, but the shelter first needed to perform a temperament test on him. While McKay waited for the test to be done, she visited Blue again, bringing him a bone and a new doggy bed.

“I got a little bit of attention from him,” McKay said. “He wouldn’t let me pet him or anything. But he liked his bed for sure.”

When McKay visited a third time, Blue finally perked up. “He came straight to me!” she said.

After a long week waiting for the shelter to do the temperament test, McKay picked Blue up and took him home. Once freed from the stress of the shelter, his whole demeanor changed. 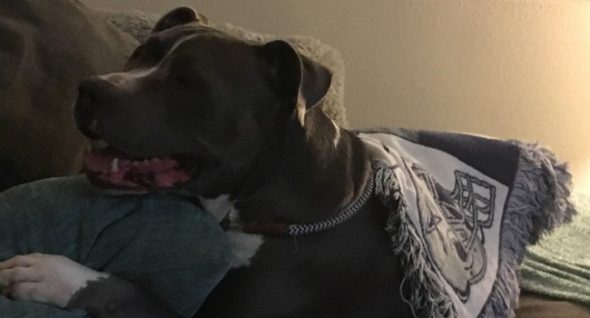 “He kind of tricked me,” McKay said with a laugh. “I was expecting to get a really laid back, chill dog, but as soon as the gates opened in the kennel, he was super excited. And he loved riding in the car. He wanted to stick his head out the window.”

At home, after a nice bath an a walk, an exhausted, relieved Blue sacked out on the living room couch.

“He seems to be making himself right at home,” McKay said. “He has his spot on the couch.”

Besides sleeping, Blue loves belly rubs, cuddles and gazing into mirrors. “He’s obsessed with looking at himself in the mirror,” McKay said. “We have a vanity that comes down to about his level, and he just sits there and smiles at himself and wags his tail.”

Blue still has a lot to learn — he still needs to learn basic commands and how to walk on a leash, McKay said. But she can already tell that this once-sad shelter dog is going to be just fine. 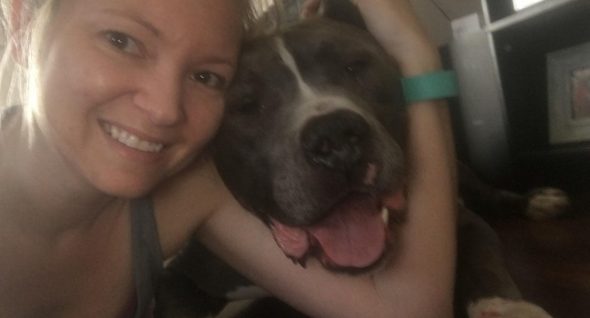 “He just seems happy,” McKay said. “I got home from work yesterday, and he ran straight to me. He’s just a good dog. I’m super excited to have him be part of the family.”

While Blue was lucky enough to get a forever home, Carson Shelter has a constant influx of animals who need help. If you’re interested in adopting a dog, check out the Saving Carson Shelter Dogs Facebook page. 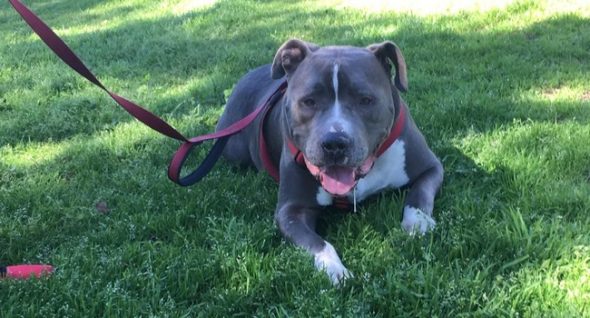