Heartbroken in her hometown of Mexico City, 7-year-old Sol was missing her puppy, Sol didn’t despair, she took matters into her own creative hands! 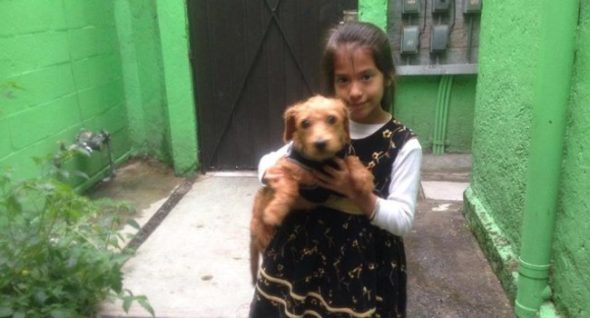 Her family adopted adorable Morgan back in May and the two were the best of friends and when the pup disappeared, Sol became focused on getting him back. Searches turned up nothing and she decided to make posters to hang around the neighborhood in the hope that someone had seen or found him. Except her family had no photos of the dog!

“She cried when I told her Morgan was missing,” Sol’s mother, Mora, told The Dodo. “She started making the posters that night.”

In the poster, Sol calls Morgan her “best friend” and although her family does not have much money, she still felt a reward was important, and so she offered chocolate.

“She bought it with her own money that she saved,” Mora said.

And of course, she drew pictures of Morgan so everyone would know who to look out for.

Not surprisingly, the adorable posters wound up on the Internet, where they tugged at the heartstrings of thousands of people. In a matter of days, the images had taken on a life of their own. 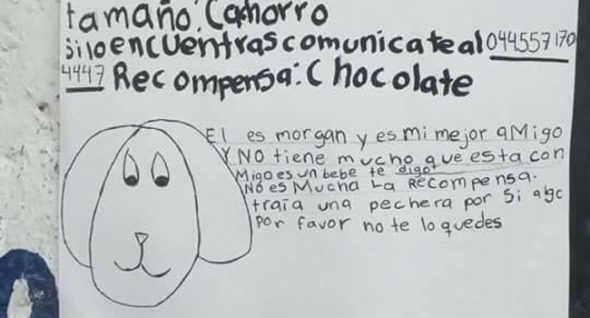 “We never thought it would become viral,” Mora said. “As parents, we gave Sol the tools to help find him, but we thought we would never get him back. Sol had faith.”

So many people in the community were looking out for Morgan because of the attention Sol’s poster had gotten that they eventually got the call they were waiting for. A woman had found a dog she suspected was Morgan and called Sol’s family to meet.

“When we went to the point where we agreed, Sol saw the dog and shouted to him, ‘Morgan!’” Mora said. “The dog jumped out of the woman’s arms and went running to Sol. The lady realized that it was the dog we were looking for.”

True to her word, a delighted Sol gave the woman a chocolate reward and happily took down the posters that had helped bring Morgan home.

“She is a great little person with a lot of love,” Mora said. “And that’s what showed.”