A white German Shepard puppy named Lt.Dan from South Carolina born without his paw now has a new friend who understands his unique struggle.

On Monday the nine-week-old puppy was given to three-year-old Sapphyre Johnson who is missing both of her feet. ‘He’s just like me!,’ the toddler exclaimed with joy the first time she ever saw a photo of Lt. Dan.

The dog’s original owner Karen Riddle said that Lt. Dan, who was born with eight other puppies in a litter – and could have been euthanized. 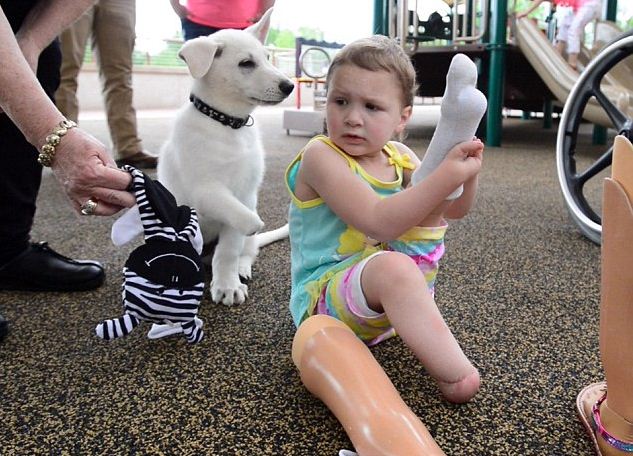 Missing their feet: Of the nine pups in the litter, Lt. Dan, named for the character in Forest Gump who lost his legs, was the only one missing a paw and Sapphyre Johnson had to have her feet amputated 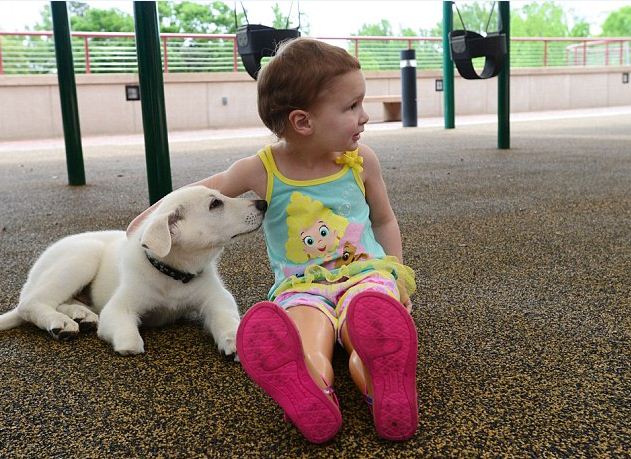 On Monday, the nine-week-old puppy Lt. Dan without a paw found a new home with Sapphyre Johnson, a toddler who lost both of her feet 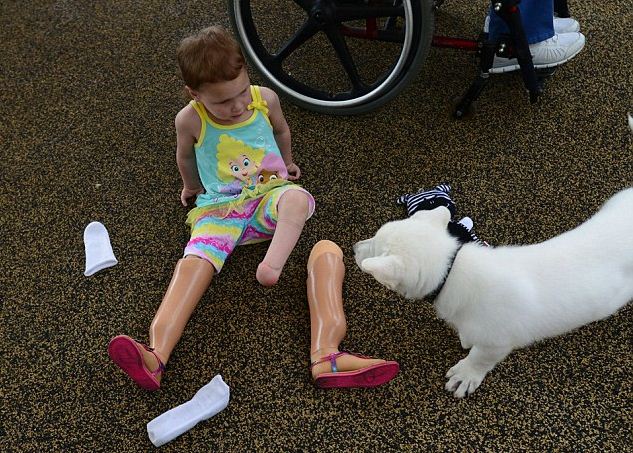 Just like me!: Sapphyre and Lt. Dan made fast friends on Monday and the two will grow up together at Sapphyre’s family’s home in Tennesee

Sapphyre, who is from Tennessee, has been in the hospital ever since she was just three-months-old.

‘When I was seven months pregnant, they did an ultra sound and told us she may be missing some fingers and toes,’ said Sapphyre’s mother, Ashley Johnson.

‘They don’t know what caused it,’ she said. 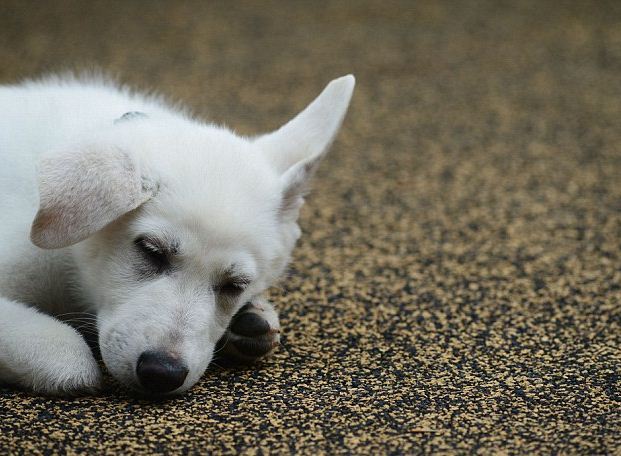 Different: Lt.Dan was the only one out of nine puppies who was born without a paw and fellow breeders suggested to his original owner that he be put down 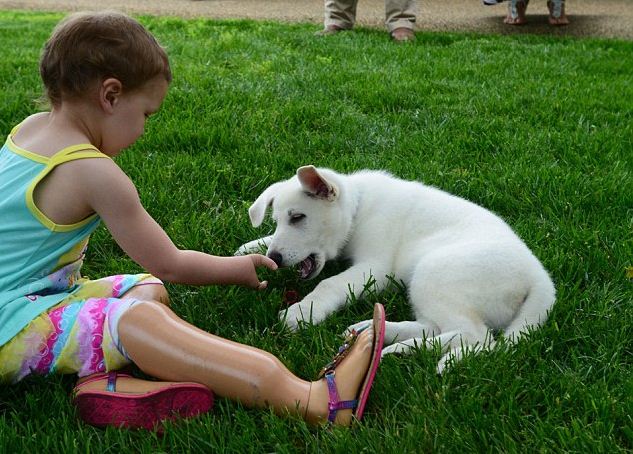 Brilliant Idea: Rather than kill Lt. Dan because he was different, his original owner Karen Riddle suggested that he be placed in a home with a wounded veteran or special needs child 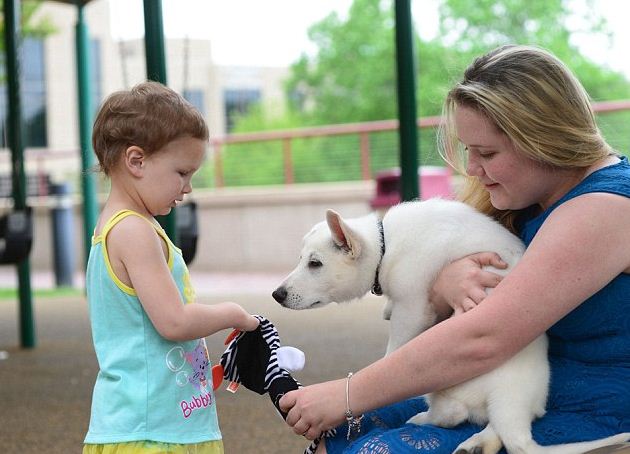 Shriners gives prosthetics and orthopedic services to children under 18 no matter what their family’s income is.

‘She had just two really long toes on each foot. And when she was 1, we had them amputated so she could be fitted for prosthetics,’ said Sapphyre’s mother.

Shriners even suggested prosthetic leg could be made for Lt.Dan when he grows large enough.

When Sapphyre saw a picture of her new puppy she knew that she had to have him and she felt an instant connection.

‘The first time I showed her a picture of the dog, she looked at it for a moment, and she said, “That’s my puppy. He’s just like me,” ‘ said Elaine Hardin who works at Shriners. 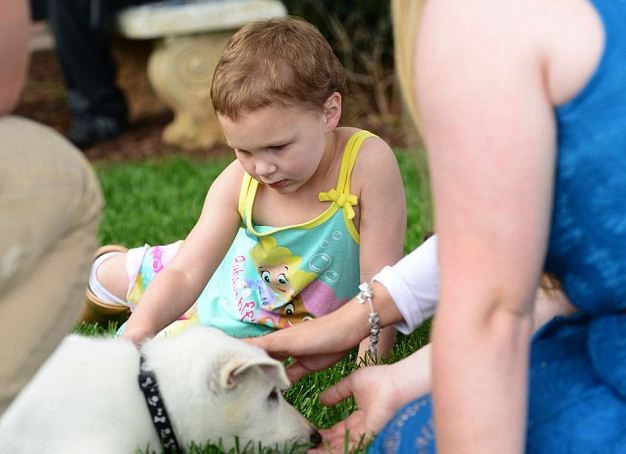 ‘He’s a special dog and he’s going to a special child.’

Hardin told Greenville Online that the dog will help Sapphyre make friends and will also help her to explain her disability to other kids.

‘In the future, I could see Sapphyre at her first show-and-tell in school and she could bring in her dog and explain about her dog and herself,’ Hardin said.

‘Everybody loves dogs and they’ll want to know about her dog that’s special like her.’

On Monday Saphyyre was so happy to have her new puppy.

The puppy felt so at home with his new owners that it fell asleep in the car as Sapphyre made her way home to Tennessee with her family. 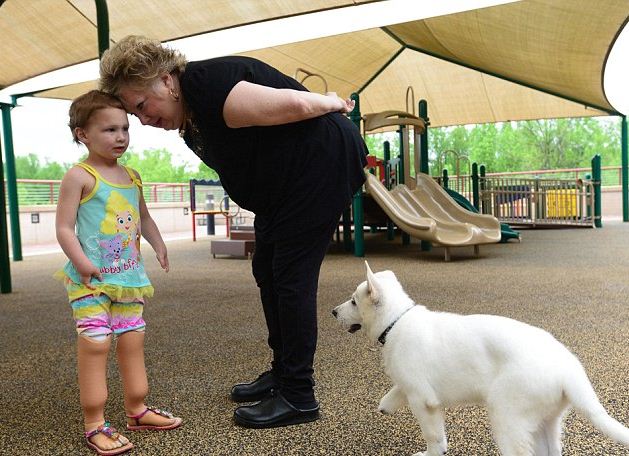 Right at home: The puppy felt so at home with his new owners that it fell asleep in the car as Sapphyre made her way home to Tennessee with her family.