Pet abandonment in the world today has become a cause for concern. There are countless loving, and adoptable dogs that are put to death yearly. This is because the owners of these dogs abandon them and because people who breed pets keep breeding more puppies so as to make more money. People often mistreat their pets. They treat their pets with lack of concern and care. And these creatures do not deserve such cruel treatments. 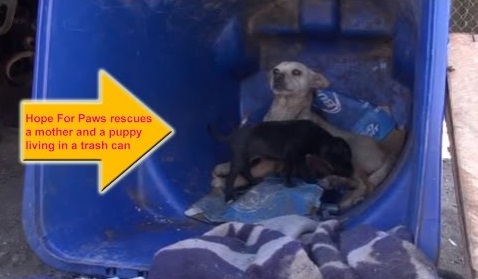 This was the case of Meadow and Zoe two cute dogs that were found at an abandoned construction site. They were saved and named by volunteers working with the animal rescue organization Hope for Paws.

When Hope for Paws Rescue came to save them, they found the mom and her cute little puppy in a trash can. They learned that Zoe the mother was abandoned by her original owners when they moved out of the area. She had to leave on the streets and fend for herself by managing to eat consumer scrap that passers-by left behind.

One of the construction workers was kind enough to make a small shelter for Zoe out of a plastic waste bin, but no one came to take her. While Zoe was out, she got pregnant and produced many puppies. Her puppies were stolen from her apart from Meadow by the children in the neighborhood. Then Lisa Chiarelli and Eldad Hagar, who work with Hope for Paws rescue organization, found Zoe, and her remaining puppy, Meadow. It wasn’t easy at first to approach the pair. The Hope for Paws rescue workers, eventually, managed to draw both dogs out with food (hamburgers, specifically).

After successfully drawing them out, the workers got closer to the cute dogs, and Zoe let them pet her gently. While her puppy Meadow came easily to the humans as she hadn’t experienced any pain caused by humans in her lifetime. After a short time, Zoe and Meadow were taken to an animal shelter. Particularly the Shelter Hope Pet Shop. They will remain there waiting to be adopted by a loving and caring family who will treat them gently and never, ever abandon them. If you are interested in adopting these cute creatures or supporting these rescued pets, contact the Shelter Hope Pet Shop or donate $5 to help the Hope for Paws rescue organization.