As much as our loyal companions help us in every way, dogs also have an act for helping other animals as well. Beyond providing us loyalty, they may take on jobs that can make the world a better place.

One of the pups who found an act for that is a 9-year-old German Shepherd named Sarge. When Sarge was a puppy, he was not friendly and could have been considered his own version of a Scrooge. Everything changed when his owner, Cheryl Stephen, brought home an injured fawn named Buckwheat. 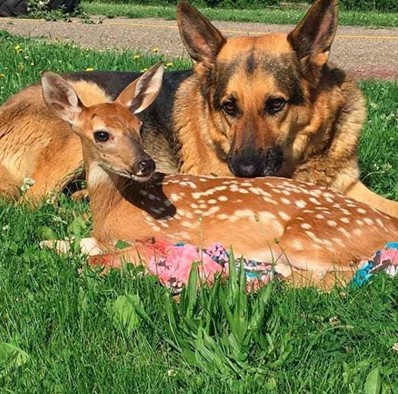 The fawn was found lying in the middle of a road, in a way that makes it seem that he was abandoned by his mother. If Cheryl had not found the fawn, it is very likely that Buckwheat would have not survived. It is still unknown what happened to the baby deers mother, but thanks to Sarge and Cheryl’s help, the baby found a safe place to recover.

“When I walked in the door carrying a fawn, Sarge springs into action. He wants to check them over and will frantically sniff and nose around to determine their condition,” Stephen told Paws Planet. “The fawns are drawn to Sarge and feel safe in his presence. Sarge won’t leave their side” 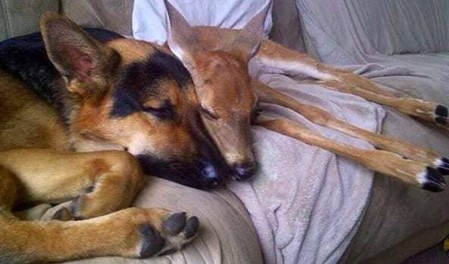 When Buckwheat finally came back to health, it was his time to be released back into the wild. Since then, Sarge has now taken on the responsibility for caring for orphaned and injured wild fawns. No matter what happens, he is always happy to do his job and has a special place in his heart to give the injured animals a lot of love.

The Stephen family states that they are so proud of what an amazing dog Sarge is. If you want to see more of his work, you can follow him on Instagram to keep updated with his daily life and all the wildlife that is brought into his care to recover.