Duke is a three-year-old Great Dane from Oklahoma who got lost from his home back in December 2013. On March 3, 2016, the gentle giant was picked up from a field 350 miles away from home in Texas. For two years and three months, the dog’s owner missed and hoped to some day reunite with his dog, and thanks to a microchip and the good Samaritan who found him this reunion happened. 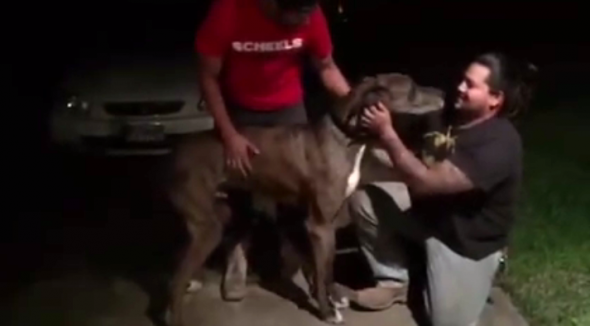 No one knows how Duke made it all the way to Texas or how his life was during this time. Walking all those miles in two years is possible, but based on the good health he was found in,  Duke had some human help making the long distance trip.

David Walker was out on his Texas property walking the surrounding fields when he spotted some dogs in the distance.

“[I] saw a couple of dogs in the pasture and walked along the side of the house trying to call them,” posted Walker on his Facebook page. “[I] felt a dog’s nose nuzzling my palm. Looked down, thinking I’d see my dog Stella, and it was this Great Dane. Really friendly dog.” 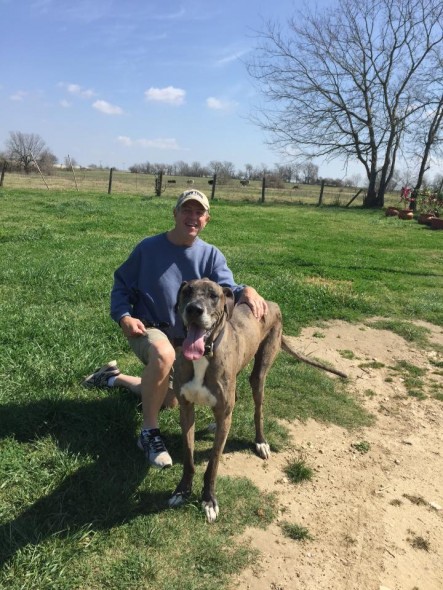 The man took the dog to his veterinarian to get him scanned for a microchip, and even though he was told not to get his hopes up about finding a chip – let alone one that was active and up to date, the good Samaritan was in for a huge surprise.

“Within 15 minutes [the veterinarian] was calling to tell me this big boy’s name is Duke, and his owner, who lives in Oklahoma some 350 miles away, hasn’t seen him since December of 2013. She said he was really choked up, in tears, on the phone,” said Walker.

The dog’s owner was identified as Julio and he couldn’t believe his best friend had been found. After two years and three months not knowing anything about the dog, hope of ever reuniting with him was almost all gone. As soon as Julio heard his dog was well and waiting for him in Texas, he packed up his car and made the long distance trip to meet with his buddy and bring him back home. See the reunion video below.

Oh man, what a wonderful moment, Duke reunites with Julio and his brother Sam, so very cool. It's been 2 years, 3 months and some 350 miles since Duke went missing from their front yard in OK City. Check out the story on my post just below! Heart warming, man. Congratulations, guys. And he's only 3 years old! Duke even recognized the sound of their truck when they pulled in, he KNEW it was them. Sweet,

Walker later said the gentle giant never forgot his owner, he recognized even the sound of his truck.

Once again here’s proof that microchips do work. It saves lives and makes reunions possible.