Charlie Bear was just a puppy when Kelly O’Connell, then 19 years old, adopted him.

She was living in New York at the time and Charlie, a 12-week-old black lab mix, had been found in a shopping cart. It was the middle of winter. 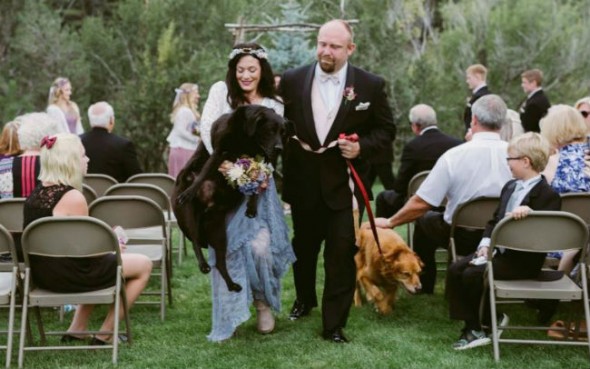 O’Connell wasn’t in the market for a dog, but she and Charlie were meant for each other. She felt it. She knew it.

Years passed. Kelly and Charlie moved to Colorado. Then Kelly met James Garvin, found love and the pair moved in together. Charlie came too, of course.

O’Connell and Garvin, both veterinarians, were married this month. And they hoped Charlie, 15, would be there, too. Earlier this year, he’d been diagnosed with a brain tumor. His health was slipping, and they knew he didn’t have much time left.

“I had actually made an appointment for somebody to come to the house and we were going to put him down a week before the wedding, because he had had five seizures and we were just like ‘this is too much, I don’t want to do this for him anymore,’” O’Connell said. “Eventually, it was almost as if he was like, ‘No, I want to see this.’ He got better.”

Charlie Bear made it to the wedding. He even went down the aisle. But he couldn’t make it back. So the maid of honor, O’Connell’s sister, carried him.

“There isn’t enough mascara in the world for these moments,”Jen Dziuvenis, the wedding’s photographer, wrote in a Facebook post. “Dog people are the best people.”

“The world,” O’Connell said of her sister’s effort. “It meant the world to me.”

“This is what love looks like,” Dziuvenis said of the moment. “Love for family, love for animals, love for your sister. It was just the most touching display of that that I’ve seen, and it was spur of the moment, it just happened, because that’s how these people are.”

After O’Connell’s sister carried Charlie back down the aisle, bride and groom dropped to their knees and hugged him. 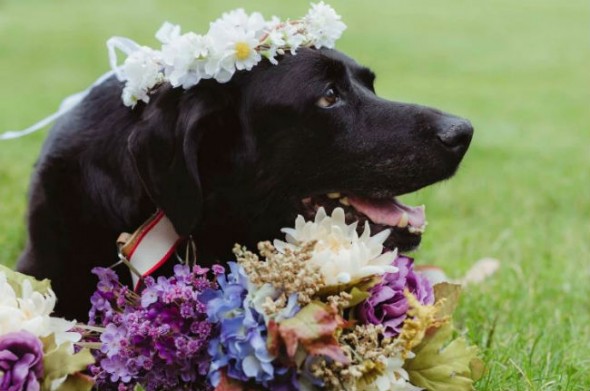 “I just kept saying, ‘You made it buddy, you made it,’” O’Connell said. “He just had a giant grin on his face.”

As a vet, O’Connell understands the struggles pet owners go through wondering when it’s time to say goodbye to an ailing loved one. She tells people to count five things that their dog loved, and if they can take away three of those things, then its clear their pet’s quality of life is dropping. Charlie had been O’Connell’s marathon-training buddy, so seeing him not be able to walk a few feet, she said, was “kind of like a sucker-punch to the gut.”

“I think despite that feeling though, when I look at the pictures, especially the one where the flowers are all around him, I just think he looks so happy,” she said. “Looking at those makes me think, he just wanted to see that, us come together, and I guess his mom be taken care of.”

O’Connell said Charlie was put down a few days after the ceremony. She described the wedding pictures as “priceless, absolutely priceless.”

“He may not have been able to do what he wanted to do, and his body was definitely failing him,” O’Connell said. “But he was happy to be there.”