That’s why a video published by The Dodo gave us an “aww” moment about a year ago.

You see, the video tells the story of a family pet, a golden retriever named G-Bro, and his deer bestie, Buttons.

The two animals met more than a decade ago, when G-Bro’s human family found the deer that had been hit by a car. The family immediately contacted some friends of theirs who were experienced in taking care of deer, and they kept the wild animal with them until she had recovered from her injury.

At the time, G-Bro was also a puppy, so the two animals basically grew up together, and even after the deer returned to her wild home, she has made sure to return to pay frequent visits to her human friends and canine bestie. Every spring, she also comes back to introduce her fawns to G-Bro, and it’s the cutest thing ever.

You see, G-Bro, albeit a male dog, acts like a second mother to the deer’s babies. He’s really careful with them, making sure not to hurt them in any way, and he always protects them.

“G-Bro is so gentle with her babies,” the dog’s owner shared with The Dodo. “He just loves on them. He playes with them. But he’s just as gentle as he could be.” It’s just amazing how Buttons always comes back to the family’s home so that her dog friend can meet her babies, and she’s not scared he could harm them.

You see, deer normally become aggressive if dogs get too close to their little ones, since they perceive canines as predators. “Deer aren’t generally considered dangerous animals, but during rutting season, it isn’t uncommon for a buck to attack a family pet that gets just a little too close. Bucks can cause serious injuries to cats and dogs, so you should be aware of when your pet is most at risk,” AESC warns.

But not in this case. These two animals basically grew up together so their bond is as strong as it can be. 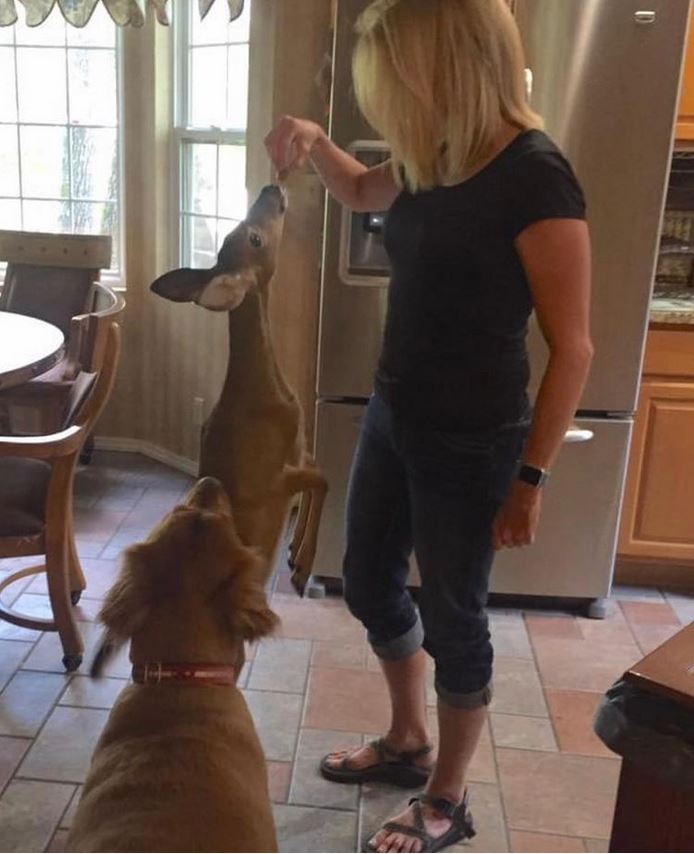 They even used to do tricks to get treats when they were little! So, how could Buttons ever be afraid of G-Bro or worry about how he would treat her newborns?

Even when it’s just the two of them, they just can’t seem to get enough of each other. They keep licking each other, they clean each other, and they crave each other’s attention. “Buttons will show up at the door,” G-Bro’s mom says, “and that’s when you know she wants to see her buddy. She’ll even paw at the door if you’re not answering in a timely manner.”

Wow these two really are best friends and they remind it to their humans whenever they get the chance.

What a beautiful and heartwarming story!

See G-Bro cuddling with the fawns and playing with his deer friend in the video below.