Blossom is a petite southern belle who recently found herself dumped at a Texas shelter. When the kind folks at Westie & Scottie Rescue Houston took her under their care, they discovered she was pregnant and heartworm positive. On June 10, Blossom welcomed three puppies – Bluebell, Begonia and Buttercup. Sadly, Bluebell and Begonia passed away a few days later, but Blossom soon got the chance to be a mother once again – times six!

Reed, Ash, Forest, Meadow, Petal, and Fern were found by the side of the road; tiny, helpless and with no mama to be found. Blossom’s rescuers consulted her vet to find out if introducing the orphans to the grieving mother could possibly be the solution everyone was searching for.

With approval from her “dogtor”, the six hungry pups were placed in Blossom’s nursing pen next to her one remaining pup, Buttercup. The heartbroken mama immediately climbed in and began to lick and clean the orphans. She happily allowed them to nurse as if they had always been her own.

The little blended family of eight is thriving thanks to the generous rescuers who stepped up to care for them. Who knows what Blossom’s fate might have been had they not pulled her from the shelter? It just goes to show that saving one dog’s life can set off a chain reaction of love. 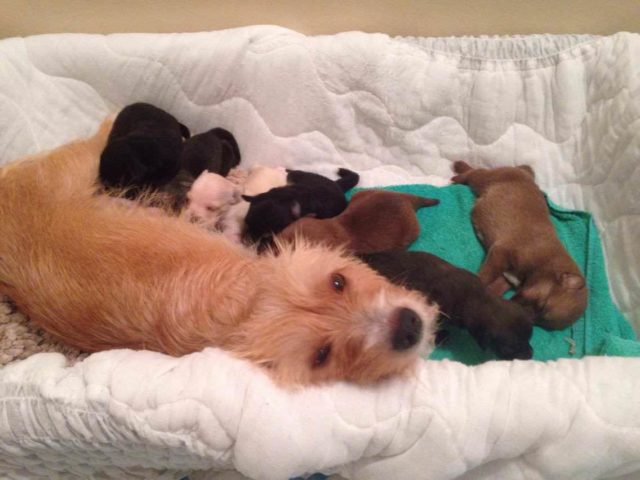 Buttercup, Blossom’s one surviving puppy will be three weeks old tomorrow and her six adopted “kids” are about the same age. They will stay with Blossom until they are twelve weeks old, fully vaccinated and socialized.

Blossom will then be spayed before undergoing heartworm treatment. Once she has a clean bill of health from her vet, Blossom will be ready to “choose a forever home!” The pups will be available to foster once fully vaccinated and for permanent adoption after they are spayed and neutered.