At first he was shocked, then he was angry. Jerry Murray had just gotten home from work when he noticed a strange backpack in the bed of his truck. When he took a closer look, he saw a pair of eyes staring back up at him – stuffed inside the backpack was a puppy! Jerry immediately thought “What am I going to do?” 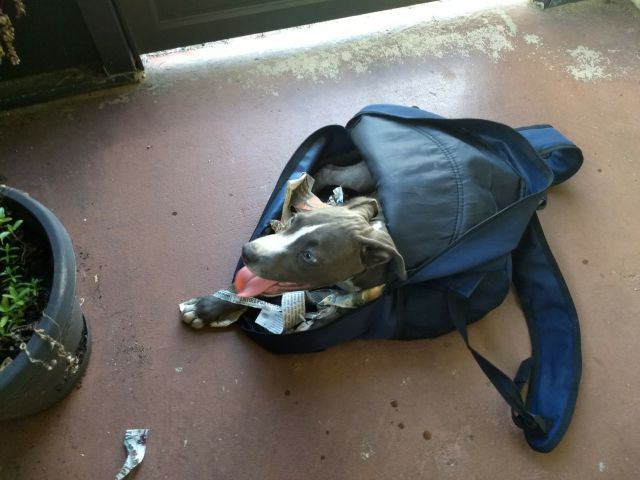 “He’s in there, he’s panting, and I see him and I’m like ‘what am I going to do?’ I gave him some water, gave him some food and let him relax a little bit, ’cause I’m sure he was traumatized from the ride,” Jerry said.

The dog looked very sad and he was dirty, thirsty and lethargic after surviving several hours in the hot Florida sun. So Jerry right away gave the puppy some water and some food.

The U.S. Air Force veteran guesses that the puppy was abandoned in his truck sometime over the three hours he was at a meeting in downtown Tampa. Jerry then drove home (a 35 minute trip). He is thankful the puppy survived.
Jerry and his wife already have three dogs of their own, weren’t able to add a fourth, so he and his wife reached out to Second Chance Friends Rescue.

The puppy, now named Zeus, will be available for adoption through them. I’m so glad Jerry saved Zeus before it was too late! Share this lucky rescue with your family and friends.