When Paul Grondahl and his family lost their dog Daisy, he wrote this beautiful tribute in honor of her:

I lifted Daisy, our 14-year-old black Lab, from the back seat of the car. I placed her gently onto a brown blanket spread on the floor of the veterinarian’s exam room. Caroline stroked Daisy’s gray muzzle, which rested in her lap. It was a week after Caroline’s 18th birthday, two weeks after her high school graduation and less than two months before she leaves for college.

Now, another passage awaited, one we had dreaded for months. Daisy became incontinent, and her hind legs began to wobble and teeter like an old broken gate. With each fresh indignity, more of the spark went out of her brown eyes.

Last week, those deep pools of soulfulness seemed to beseech us to let her go with dignity. She was 98 in dog years and we had crossed a fine line between a desire to keep Daisy in our lives and to do what was humane for the dog. 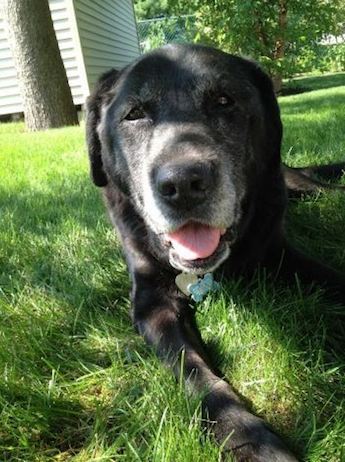 My wife, Mary, sat on a bench in the room and clutched Daisy’s collar. I stretched out on the floor and spoke to Daisy in a soothing voice and told her over and over what a great dog she was. I rubbed her ears and the velvety tips still felt puppy-soft. There was a box of tissues and we each began to empty its contents.

We had given the puppy to Caroline as a surprise gift on her fourth birthday. Caroline’s face radiated pure joy as a small black fuzzy ball of mischief scuffled behind her and licked her arm. I captured that moment in a photograph. 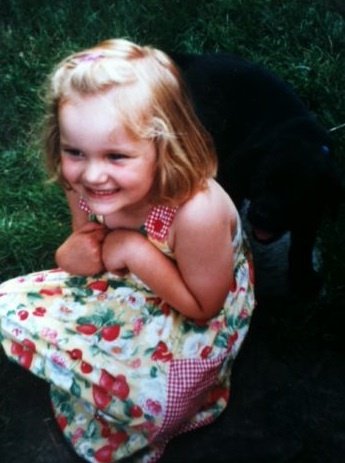 She named her Daisy.

This was several months after we put down Jazz, our black Lab mix, at 13. Few things can compare with a childhood shaped by the unconditional love of a good dog. We wanted that bond for Caroline. Daisy was the first purebred I had ever bought after adopting dogs from the pound. We got her from a breeder who worked with my wife.

I took Caroline to play with the puppies on a pretext a few weeks before her birthday, and she gravitated to Daisy, the runt of the litter.

I think she felt sorry for the timid little pup who got pushed around by her more aggressive siblings.

Daisy came with an AKC certificate and a folder that included a family tree detailing her championship pedigree. I lost the paperwork, but the breeder had leveled with me. Daisy could never be a show dog because she had small white patches behind her front paws and other slight imperfections. She was a family pet who was never a champion in anything except this: The love she brought into our lives was world-class.

She deserved some kind of ribbon for her appetite. She was never finicky and ate the same brand of dry dog food her entire life. When she heard the nuggets hit her stainless steel bowl, she began to perform what we called “the dinner dance.” It was a spinning, whirling dervish motion in which all four paws lost contact with the ground. She could Hoover a cup’s worth in less than 30 seconds. Even in her final days, she did the dinner dance, a slow and creaky version with a single rotation, before plowing into her food. She never left anything in the bowl. 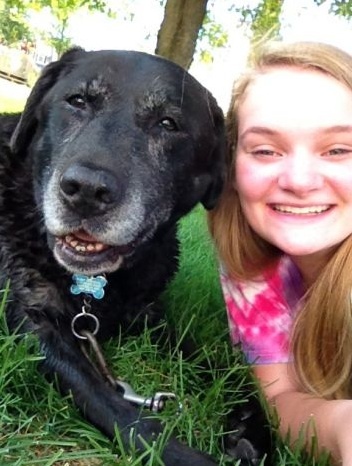 I left her in the garage once after we moved into our new house when Daisy was 3 years old and she chewed off long strips of drywall tape and joint compound. She never destroyed shoes we left around the house, except for the plastic tips of the shoelaces in my running sneakers. I caught her crunching those a few times like so many cashews. If I tried to scold her, she would scamper around the house in a move we called “the butt scooch.” It resembled a Roadrunner cartoon and spawned her nickname: Crazy Daisy.

Labs are known to love the water and their webbed feet make them strong swimmers. Not Daisy. She was a wader who preferred to galumph in the shallows as she chewed clumps of pond grass. We tried several times to carry Daisy out into deep water and to coax her into swimming in ponds, lakes, rivers and the ocean. No go.

She also had an aversion to stairs. She lived her entire life on the ground floor of our house and never ventured upstairs to the bedrooms. We tried many inducements, but none worked. She slept on a blanket on a love seat in the TV room and was content. Once we rented a motel room in Provincetown for a long weekend because it allowed dogs. I did not realize the room was on the second floor until we arrived and the only access was an outdoor wooden stairway. I tried everything, but Daisy would not budge. I ended up carrying her 70 pounds – four legs locked at full extension — up and down the stairs three times a day. She was usually sandy and wet from the beach. The guests gave us a wide berth.

An obedience class early on had little effect and our attempts at training became sporadic and half-hearted.

Daisy was a jumper and a flopper. She jumped up onto anyone who came to our house in an exuberant greeting. I could not break her of the habit until arthritis did at age 10. On walks, when we passed another dog, she immediately flopped onto her back in a submissive posture. She did not possess an aggressive bone in her body. She even flopped for cats. Daisy loved all creatures great and small. 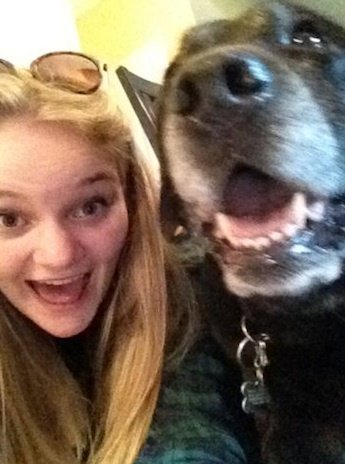 Daisy had champion traits. She was a pro at curling up at my feet as I wrote in my study, immovable for hours at a time. No dog was better to watch movies with because she never stirred.

Each morning as I came downstairs, Daisy greeted me with a full-body wag. I reciprocated with a bear hug. She groaned with pleasure. She brought out good traits in us, like love and tolerance and gentleness. I thought of a magnet my parents have on their refrigerator: “I aspire to be the person my dog thinks I am.” We felt that way about Daisy.

In the vet’s office, the drugs did their work. Daisy slipped away, silently and peacefully. Time seemed to stand still. We had been there for an hour, saying our long goodbyes. The tissue box was empty. I looked back one last time at the black mound on the brown blanket on the floor. We closed the door quietly behind us and carried out into the lengthening shadows the memory of a great dog, our beloved Daisy, a true champion in the things that mattered.

~Written by Paul Grondahl. This article was first published on DogHeirs.com on July 13, 2013.

Paul Grondahl is a writer with the Times Union and can be reached by email at pgrondahl (at) timesunion.com. “Saying goodbye to Daisy, a great family dog” was originally published in the Times Union and has been reprinted with permission from the author.