Throughout history, there have been plenty of cases where dogs have been proven to be heroes – loyal to the very end. And they have proven themselves tough, no matter their size. Back in World War II, a small Yorkshire Terrier named Smoky was a doggie war veteran. While she may not have been ferocious, she definitely had a stout heart, as her owner credited her with saving his life. After the war, she even became the first-ever registered therapy dog.

In February of 1944, Smoky was found by an American soldier in the jungles of New Guinea, abandoned inside a foxhole. At first, they assumed that she’d once belonged to a Japanese soldier. However, it soon became apparent that she didn’t understand any commands in either English or Japanese. Therefore, where she came from remained a true mystery.

She was brought back to camp where her new owner, Corporal William (Bill) A. Wynne, originally from Cleveland, Ohio, ended up buying Smoky off the solder for $6 in order for that soldier to continue his poker game. 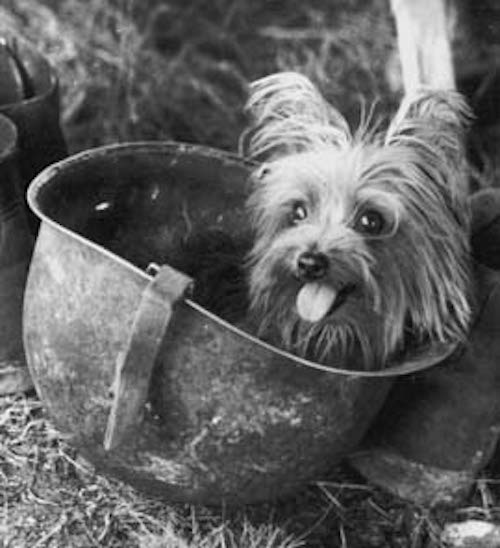 As fate would have it, it was the best money Corporal Wynne ever spent, as the little dog would then go on to save his life.

Little Smoky was credited with leading Wynne to safety during a bombardment of shellfire from a transport ship. While there were explosions going off everywhere, Wynne managed to remain safe thanks to Smoky’s warnings.

During the duration of two years, Smoky survived the hardships of life in the jungle during combat. She often slept in Wynne’s tent, and he would feed her his rations. However, she was also inducted as a member of the 5th Air Force. During her service, the little dog survived twelve combat missions and was awarded eight battle stars for bravery.

Besides her bravery, she also knew plenty of tricks, so she was able to keep soldiers entertained during downtime. Additionally, Smoky’s intelligence and stamina allowed her to run errands, such as helping the ground crewman build an airbase by running the telegraph wires through the small, narrow pipes – she was the only one who could fit.

As Wikipedia reported, Wynne once said to NBC-TV, “I tied a string (tied to the wire) to Smoky’s collar and ran to the other end of the culvert . . . (Smoky) made a few steps in and then ran back. `Come, Smoky,’ I said sharply, and she started through again. When she was about 10 feet in, the string caught up and she looked over her shoulder as much as to say `what’s holding us up there?’” 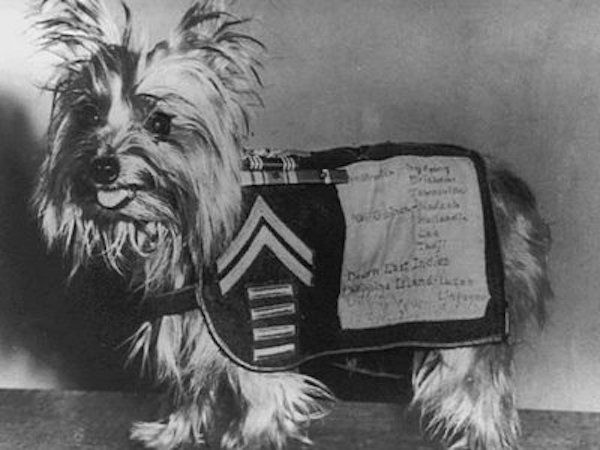 He added, “The string loosened from the snag and she came on again. By now the dust was rising from the shuffle of her paws as she crawled through the dirt and mold and I could no longer see her. I called and pleaded, not knowing for certain whether she was coming or not.”

Wynne continued, “At last, about 20 feet away, I saw two little amber eyes and heard a faint whimpering sound . . . at 15 feet away, she broke into a run. We were so happy at Smoky’s success that we patted and praised her for a full five minutes.”

After returning home from war, Smoky was hailed a heroine and a celebrity. She frequently went on TV performing tricks, as well as touring around to different veteran hospitals. Smoky was credited with becoming the first-ever recorded therapy dog. In addition, Smoky was also credited with bringing the Yorkie dog breed to prominence in the US. Smoky passed away in 1957 and the age of 14. She was buried in Cleveland Metroparks.