In Milford Township, MI, one woman and an army of animal rescuers are doing good work for dogs like Kato, a mastiff left behind when his dad was incarcerated and George, who was locked in a room because his caregiver wasn’t able to give said care, or Francis, who was dumped and left to die when her family moved. 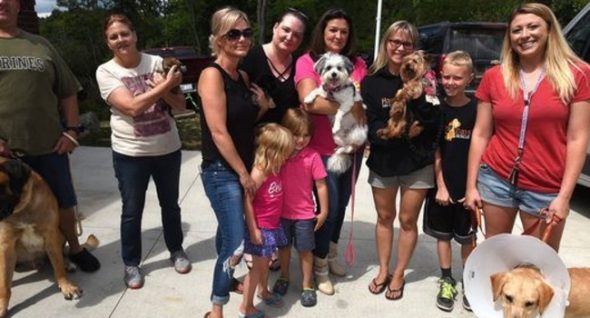 The animals who come through TLC Animal Sanctuary, have a lot of hard-luck stories, but TLC is where their stories turn around. And Nicole King’s house is often the pivotal location where that happens. King runs TLC, and every Saturday, she turns her own house into a an adoption center from noon to 1:30 pm.

“We put up a puppy tent in the front yard. Families will come over and sit around and play with puppies,” King, who is currently fostering a litter Lab-Australian shepherd pups, told Hometown Life. “It gets young kids interested in rescue. It’s great for the dogs. We’ve met some great people and we’re connecting with the community.

Caring folks often drop off supplies for the rescue, like the man who brought 40 cases of dog treats. These were divvied up between TLC and the other rescues with which they partner in saving lives. The rescue gives back to the community in other ways, too. One local resident likes to bring her daughter to play with the pups. The dogs get love and socialization. And the woman, a cancer survivor, says the time with the dogs is like therapy for them.

“Half the town has been to my house.” 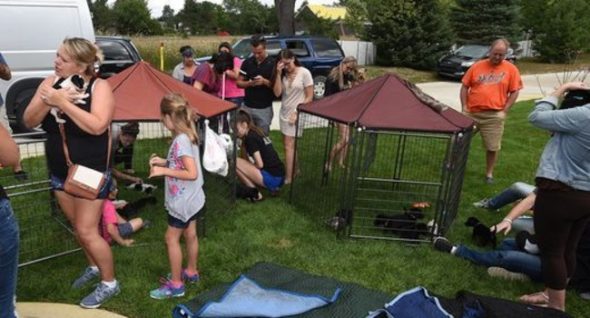 The collaboration between local rescues is impressive. Sometimes, other rescues, like Happy Days Dog & Cat Rescue in Livonia or Bottle Babies Rescue in Allen Park, bring their pups to King’s “Saturday Dog Day” at the King house. Kato the mastiff was, at press time, with King temporarily. He stayed there for a few days, enjoying lots of love and company, before a specialty rescue took custody.

Paul and Linda Belleperthe of White Lake are among the rescue’s numerous donors. They and their rescued German shepherd, Diego, stopped by King’s house last Saturday with cat and dog treats and food.

“I want to keep it local and she does a tremendous job,” Linda said.

Krista Nealey, whose organization specializes in bottle feeding newborn animals, brought a litter of cattle dog-Australian shepherd puppies and George, a 10-month-old Labrador retriever, to King’s home. The energetic young dog had spent most of his pre-rescue days in a room filled with feces after his owner, an elderly man, couldn’t handle the dog.

The two have been working together in rescue for a few months. Nealy recently began bringing “death row” dogs from an overcrowded Texas shelter up to Michigan. Her first round included seven adults and 48 puppies, which they divided among the collaborative Michigan rescues. Just recently, they brought an astonishing 90 dogs into the fold. All the rescues will take some, including King an TLC.

“If rescues all work together, we save a lot more dogs,” Nealy said. 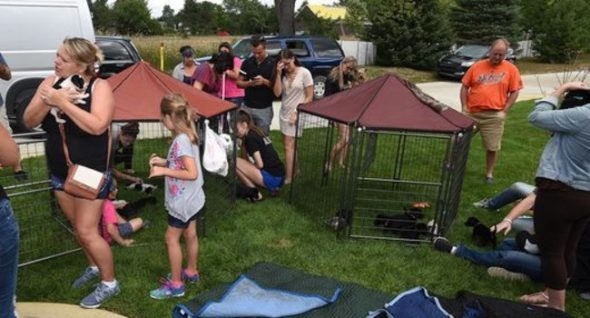 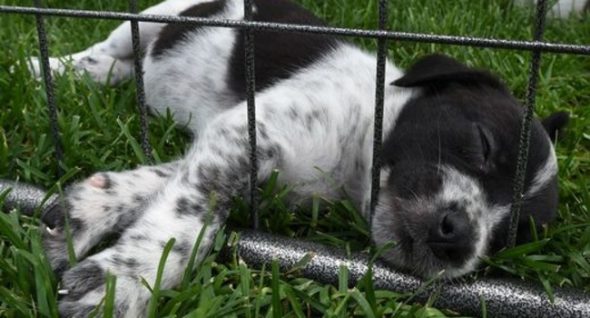 “The neat thing is by the time they get here they are ready for adoption,” King said. “We don’t have to spend so much time on our end. We can move them (to new homes) quicker.”

King has always been involved in rescue.

“My great love in life is animals,” she said. “I volunteered at a shelter (in her native Colorado) and did adoption events all over the state. It became a full-time thing. I worked with trainers and learned every aspect of rescue, home placement and characteristics of animals. At one point we had 22 fosters. It was crazy, but we saved a lot of dogs.”

She founded TLC as a nonprofit community organization, stopping short of applying for 501(c)3 status. She and her husband spend their own money to keep it going and don’t take monetary donations, instead accepting supplies — food, treats, toys, and so forth. King keeps the public up to date on TLC’s needs via social media and they often step forward to help. There is a wish list on the TLC web page, as well.

“It’s my money and my time. I do it all and I think it’s why our animals have been so successful,” she said, noting that only four have been returned over the years.

Volunteers tend to “stick around,” she said, because unlike many other rescues, they aren’t required to attend adoption events throughout southeast Michigan.

“I don’t want them at adoption events. Their (foster) dogs won’t act the same there as they normally do. And that is why half the town has been to my home,” she said, with a laugh.

Thus far, TLC has done more than 1,100 adoptions and every single animal has been through King’s home.

“I just love being around them,” King said. “I couldn’t imagine not having them.”