When you first see Moonpie, you will notice one difference right away; she’s not a dog – she’s a mini-cow who was rescued from an auction house, and according to Janice Wolf, founder of the Rocky Ridge Refuge, she’s having a bit of an identity crisis. This mini cow thinks she’s a dog! Instead of hanging out with the other cows at the sanctuary, Moonpie prefers to live with the 12 dogs there. 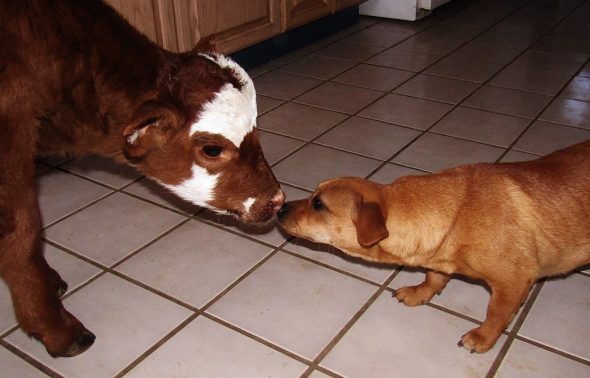 “She accepts them as her buddies,” said Wolf to The Dodo.  “Babies like that — they don’t know a whole lot about what it’s supposed to be, so they kind of just accept things.” 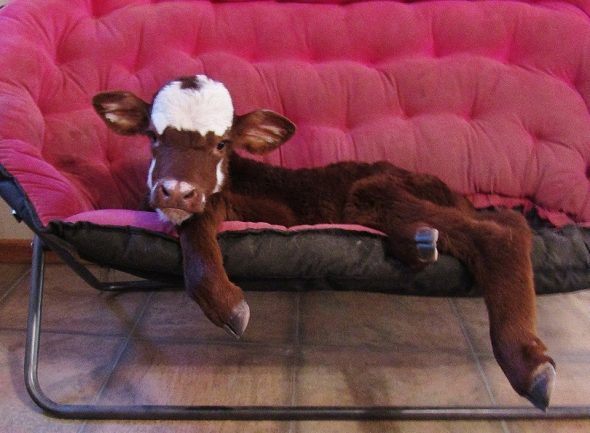 Moonpie was almost sold at a livestock auction.  Many of the animals that are put up for these things aren’t treated very well.  Wolf can’t stand the things, so a friend had to go to the auction to see if there were any animals that they could help out.  It didn’t take very long for Wolf’s friend to come across Moonpie.

“She was a mini, and you don’t see a lot of those go through the local auctions,” Wolf said. 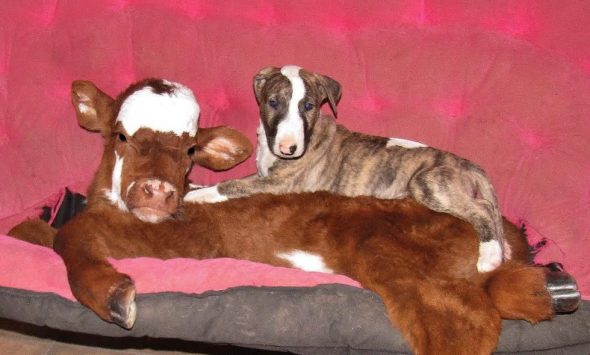 First, Wolf’s friend had to secure Moonpie, and that meant they had to make a purchase.  Then, after making sure that Moonpie wouldn’t be sold off to anyone else, they arranged transport for her to the sanctuary. 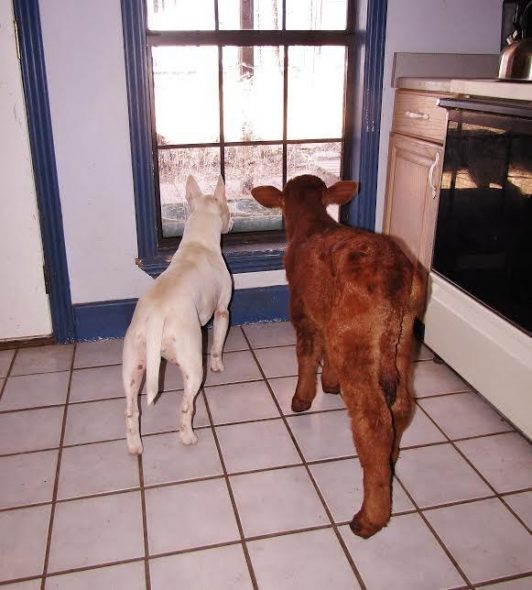 Moonpie was still very young, and needed milk.  This meant that she couldn’t just be kept outside with the other rescue cows, as none were nursing.  There really wasn’t room elsewhere, so what was Wolf to do with this baby cow? 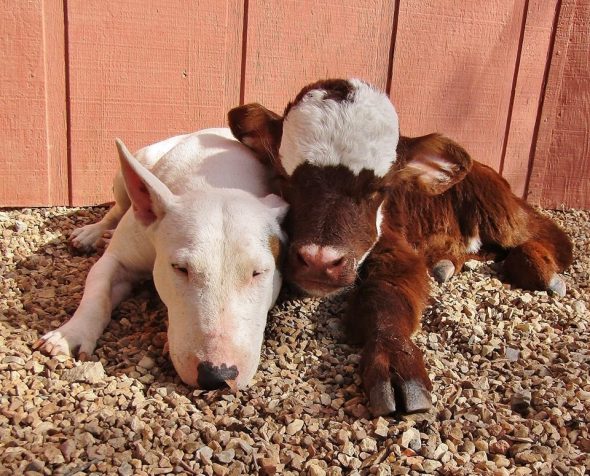 “I don’t have a lot of room here, and it was cold and rainy, and that wasn’t good for a little calf,” Wolf said.  “All my heated buildings were occupied with other critters, so that’s how she ended up in my bedroom.  I figured it would just be for a few days, but the weather just kept going whacky, so she’s been in there for the last six weeks.”

This is where Moonpie first came in contact with Wolf’s dogs.  All 12 of them.  They were all too happy to welcome the baby mini cow into the fold, and Moonpie took to them just as fast.  Everyone was getting along just great, but there was one dog called Spackle.  Spackle is a white terrier, and is also deaf.  The two of them seem to have something really special. 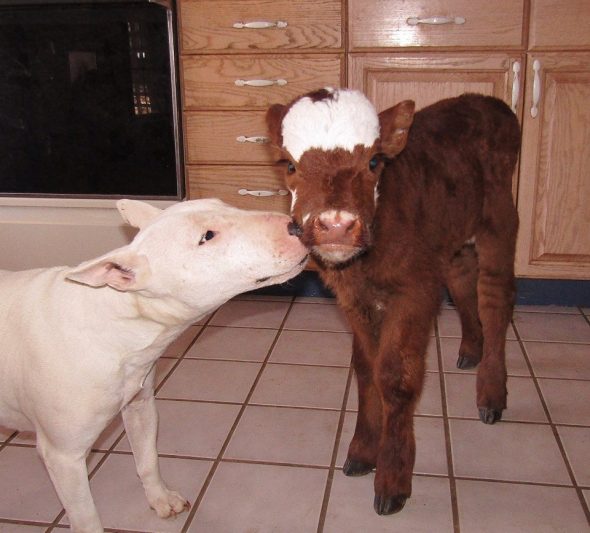 “The picture with the white bull terrier — that was Moonpie’s first day here,” Wolf said.  “Spackle loves babies, and immediately became her protector and buddy.  She wouldn’t leave that calf’s side.  They instantly bonded.” 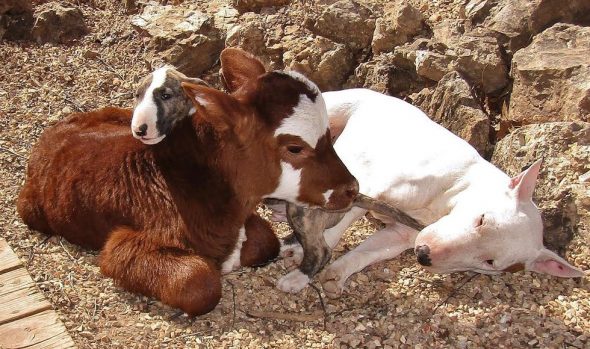 All of the dogs love to play with Moonpie, and they all take turns grooming and caring for her whatever she may need.  They all have become “surrogate moms” for Moonpie.  According to Wolf, Moonpie has even learned how to “use the bathroom” the same way the dogs do.  Apparently, she can even “hold it” like the dogs do until she’s let outside with them. 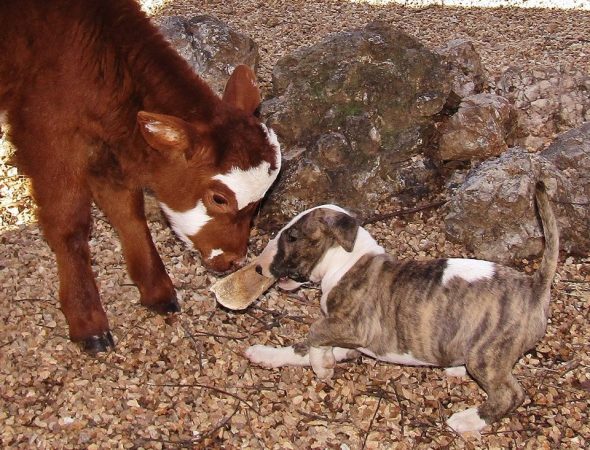 “She does what the dogs show her, so she learned how to do that,” Wolf said.

Now that Moonpie has been there for a while, and the weather is getting nicer, she’s been spending more time outside.  This means she’s getting some time to hang out with other cows, and soon she’ll be able to meet the other animals that are at the sanctuary. 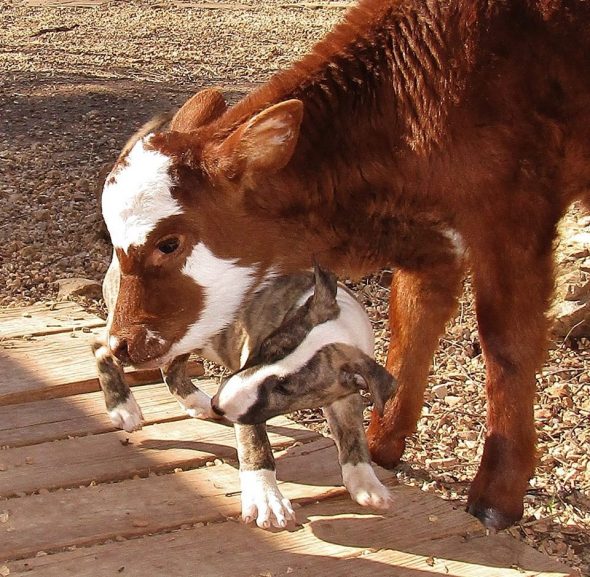 “At first she wasn’t sure what to think, and then she just like, ‘OK, a bigger dog,’” Wolf said.  “But they started hanging together, too.  She now knows she’s a cow, I think.  It’s all just a matter of who’s in your space.  You love the ones you’re with.  I think she just knows that there’s a lot of different friends in the world.”

If you would like to learn more about the Rocky Ridge Refuge, of if you’d like to make a donation to help them continue the amazing work that they do, click here. 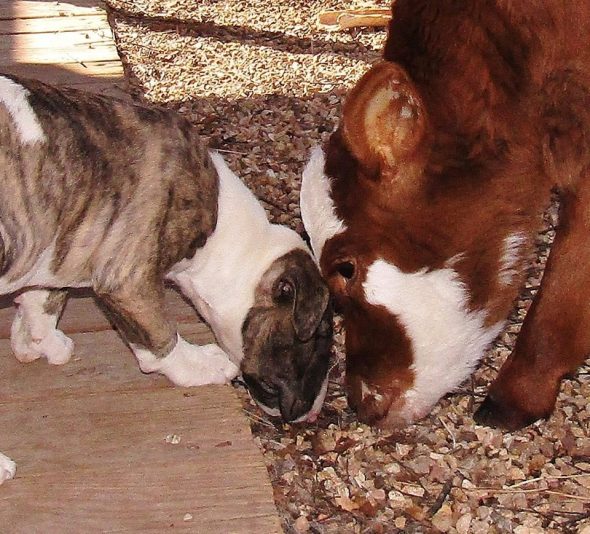 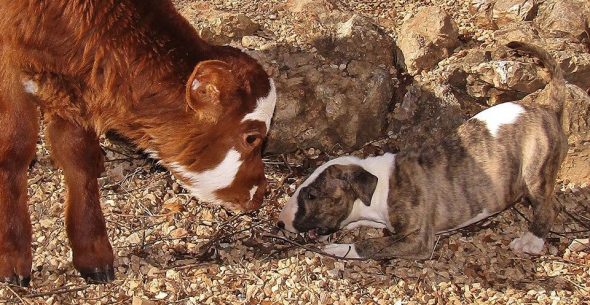