Lily was an orphan dog trotting the streets of South Africa. She was seen as a nuisance, as she went around digging through scraps and heaps of trash. Her life was a struggle for survival and it was not to most people’s liking. One day when she was seen near a school’s premises, the headmaster out of his strong dislike for her, commanded the school janitors to bury her alive.

Luckily some kind hearted soul anonymously informed the International Fund for Animal Welfare (IFAW) about her burial. When the IFAW rescuers found Lily, she was covered in dirt 5 feet deep under the earth, and was barely able to breathe. Out of sheer love, her rescuers named her Lily – a symbol of purity and virtue.

Soon this story reached national headlines and a deep need for more animal welfare programs in South Africa was recognized. The headmaster and janitors were persecuted for animal abuse and a program for educating children to be sensitive to animals was introduced at the school where Lily saw her burial.

But the most beautiful thing happened when an animal rights & welfare journalist adopted Lily and gave her a forever home… affirming our faith in life and that confirming that miracles do happen! 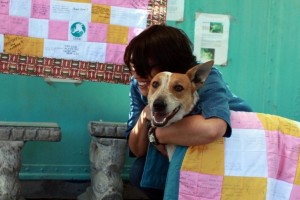