It was a violent collision in the town of Monroe, Wa. A teenager in a Hyundai Sonata meandered over the the center line State Route 522, resulting in a head-on impact with a Subaru Impreza. The Sonata driver suffered serious injuries. Three people in the Subaru were hurt, as well. A toddler, safe in a car seat, escaped unharmed.
One occupant, however, was MIA at the scene: Zaley, a chocolate lab that bolted from the Impreza following the crash. 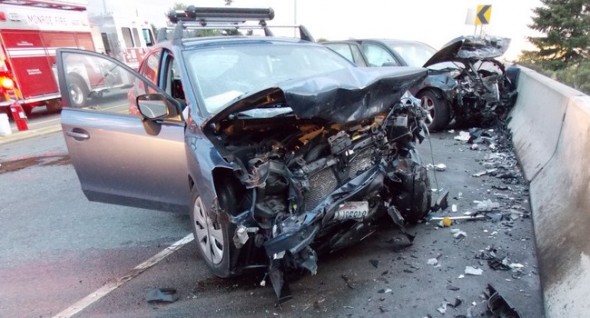 One mile away, however, he sought refuge, lying down at the door of an as-yet-unopened business: Pet Pros, in the city of Monroe. Zaley was met at 5:30 am by Breanna Findley, who was headed to work at another business in the shopping center.

“From 522 a mile away, from all of the stores, to come to a pet store,” Findley told Washington NBC affiliate KING5. “I was amazed and shocked. He was a smart boy. He came to a smart place.”

Not long after, Findley’s coworker Amber McGar showed up. McGar, a dog owner, had some treats in her car’s glove compartment.

“He started warming up after we brought the cookies,” McGar told the reporter. “I couldn’t imagine how scared he was. That had to be traumatizing.”

Through the Lost Dogs of Snohomish County Facebook group and Zaley’s tag, Findley and McGar were able to find his owner. 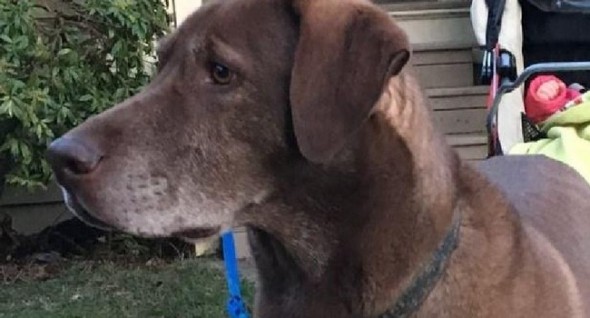 “She told me she honestly thought she was never going to see him again,” Findley said.

Zaley got a police-car escort and was reunited with his family. On Monday, she told KING 5 she was having him checked out to make sure he’s okay.

“There’s nothing better than to have your dog back after it was missing,” said Findley.