With duct tape covering her eyes and several open wounds, a German shepherd was dumped on the roadside in Harris County, Texas on Monday. ABC News reported that several of the dog’s wounds were serious and the dog also had head trauma and several tumors that appeared to have been punctured. 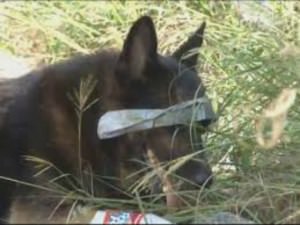 The dog was found by a Precinct 1 deputy. The Houston SPCA veterinary team also reported that her muzzle had been taped shut with duct tape. Sgt. Christine Kendrick said that duct tape is used to stop a dog from barking and it isn’t a rare occurrence. What people don’t realize is how much damage duct tape does to the skin and tissue.

The Houston SPCA veterinary team feverishly to lessen the dog’s pain and assess her injuries. They had to humanely euthanize her when they realized her skull had been crushed and she could not be saved. Share away, people.