It’s news that warms the hearts of dog lovers everywhere! More than 100 dogs were rescued last week from commercial breeding facilities – a VERY polite term for what we generally call puppy mills – scattered throughout the Midwestern United States.

The National Mill Dog Rescue brought the dogs to a large rescue facility in Peyton, CO, on Friday, beginning the arduous (but wonderful!) process of naming, evaluating, vetting and treating them. Each will be tested for heartworm and other parasites and have all their medical needs addressed. It is the first step on the road to loving forever homes.

Theresa Strader, the founder of National Mill Dog Rescue, says the dogs came from several different breeders in five different states. Most of them have spent their entire lives in cages, their sole purpose in life: producing puppies for pet stores.

“A commercial breeding dog, once it’s not producing anymore, they just kill them,” Strader told KKTV. “The bottom line is they have no future beyond that life if we don’t step in.” 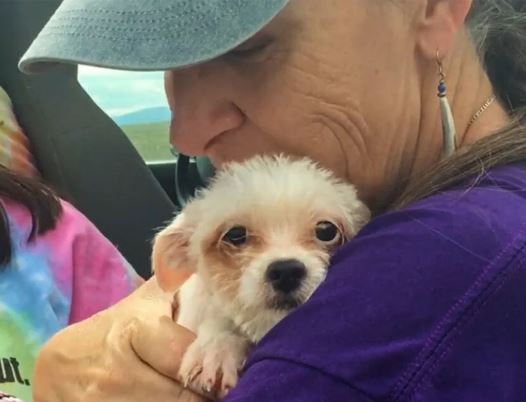 National Mill Dog Rescue takes the dogs in once breeders surrender them. Although commercial dog breeding is legal, Strader believes its standards need to be improved. She says the conditions these dogs live in range from good to horrific and everything in between.

“When you see that baby in the window, when you’re playing with it and petting it, you know that puppy is its parent’s worst enemy,” said Strader of the cute pups we see in pet stores across the country.

Strader says each of the rescued mill dogs will become adoptable and, with hope, new members of loving forever families.

“These guys have a lot of life left in them and the truth is, the way I see it, it’s our fellow man who put them in this position and we owe it to them as people who love dogs to give them a happy ending.”

The National Mill Dog Rescue has rescued more than 13,200 dogs since 2007. For more information, or to look into adopting, check out their website. See the entire video of the rescue’s Colorado “homecoming” here: