An embarrassed pet parent is trying to make reparations for his dog’s naughtiness after discovering the dog has been sneaking into his neighbors’ homes and pooping on their bedroom pillows.

The Bichon Frise-Shih Tzu cross named Jack has used people’s cat doors to break into their homes and defecate on their pillows. Apparently he’ll not to it again if he’s given a treat.

Jack’s owner, Rick Didham of New Zealand, took to Facebook as way of apology and to reach out to people who may have been one of Jack’s victims. He wrote on Beach Haven and Birkdale Community’s Group page:

“I’m so embarrassed and ashamed to say this but Jack has somehow gotten out of the property more than once. We’re trying to figure out how he is doing this and we will seal the hole when we find it. Apparently he has been caught by more than one of our neighbors sneaking in their cat door and doing number twos on peoples bedroom pillows.” 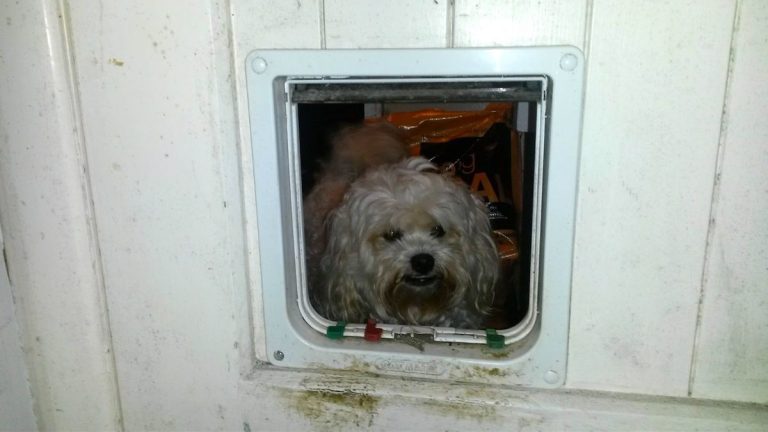 “We don’t know why he is doing this, but if you see him please be nice to him as if you’re mean he comes back and does it again. So if there has been an incident in your bedroom please pm me and well look into getting your pillow case replaced if we can. Thank you for your patien[ce].”

Needless to say, Jack’s exploits are getting a lot of feedback.

“Ahh OK not cool I blamed my wife for defecating on my pillow and [we] now are before the courts,” wrote one person.

“He’s just leaving little gifts for the neighbours. He is getting in early for Xmas!” wrote another. 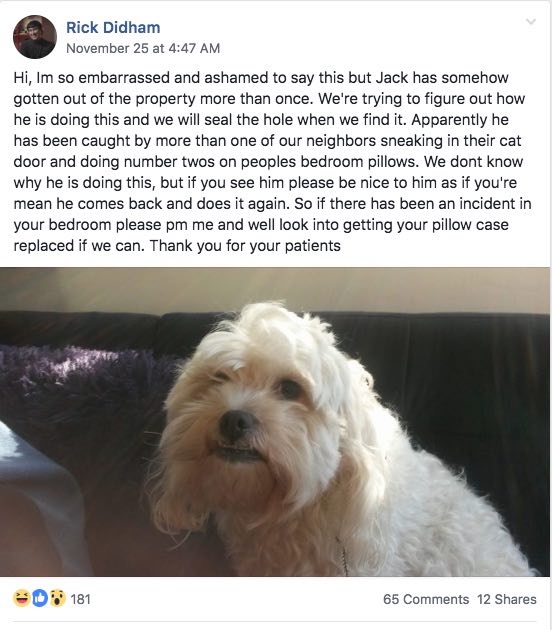 Others are more understanding of Didham’s embarrassment at Jack’s daring doo doo’s.

“My dog does this to everyone in my house,” commented Chloe Kay. “The rule is their door needs to be shut at all times and if we are at other people’s houses he goes straight to their bedroom and poos on their pillow if he can’t poo he’s pisses! It does my head in and no matter what I do to get him to stop …he’s doesn’t.”

Jack’s extortion tactics come as no surprise to Didham who pointed out his dog is “extremely intelligent and cunning. If he were a human he would be in jail.”

Didham added that Jack may be very smart but he isn’t always nice either. “He literally is an arsehole, if you give him a treat he will place it near another animal to show it off, then growl at them if they come too close to it.”

Didham told the New Zealand Herald that since posting up his announcement he’s heard from people saying that Jack’s pooping goes back two years. “Apparently he is a serial offender repeatedly going back to the houses that shoo him away. You need to give him a treat and he will leave you alone.”

Didham also shared a sweet video of Jack (and his sibling) going crazy for “walkies” and pointed out that his pillows and bedding are strategically covered.