A group of military working dogs were recently flown home to the United States after they finished their service as explosive detecting K9s in Afghanistan. The Armed Forces contracted AMK9, one of the world’s leading working K9 trainers, to transport a total of 92 retiring dogs from the Middle East to the United States.

The dogs were not Armed Forces military working dogs, but were contracted through AMK9. When they had finished their service, AMK9 made sure that none of them were left behind and that they all received the best care during their long journey home — not an easy task when moving nearly 100 animals on long flights through multiple countries!

Meticulous planning went into the operation to fly the dogs home, including arranging veterinarians along each stage of the trip to check on the dogs and make sure they were okay.

“A lot of them are coming back to be adopted, to go to homes where they’ll spend the rest of their days enjoying life,” said Guy Owens, VP of Operations at AMK9. “And that’s a good thing. 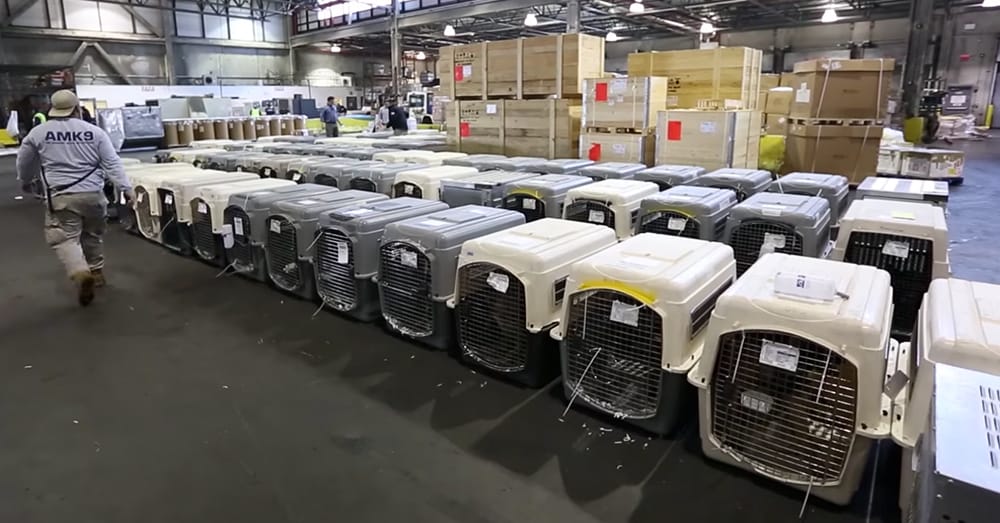 Once the dogs arrived, safe and sound, in New York they still had one last leg of the journey to get to the AMK9 compound in Alabama. They were cared for along the way, and when they reached their final destination the crew was ready to welcome them and get them settled.

Of the 92 dogs flown home after serving with troops in Afghanistan, nearly half of them were ready to retire and be adopted out to loving owners and families. The other half — still young and healthy — were able to continue working here in the U.S. for law enforcement and other capacities.

“It still gives me great pleasure being able to come to work and say I work with a canine company that does great things keeping people safe,” says Jon Wertjes, President of AMK9, “but also that we do great things for those dogs when they’re done working for us.”

Check out the start of their journey!