An Alton, IL, woman is wanted by police after leaving her own dog to suffer in failed labor for days, then allegedly bringing her to animal control and claiming the dog wasn’t hers.

Stephanie Watson, 29, was knowingly breeding the dog, authorities said. But when the dog failed to give birth, she surrendered the dog at the shelter, telling staffers she had found the animal. 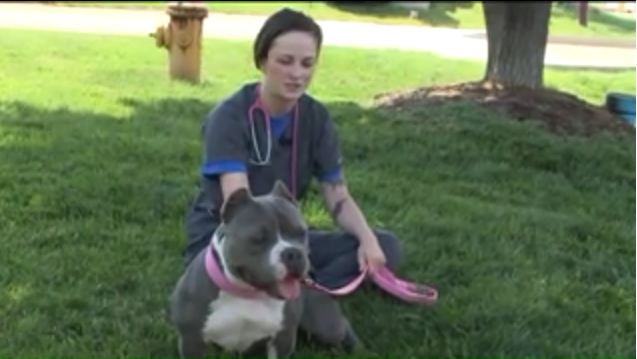 The pittie, now named April, is between 2 and 3 years old. These days, she is happy and healthy. But just two months ago, she was hovering near death after what veterinary staff estimate was three to five days in labor without giving birth.

“The fetuses, they said, were so old and decomposing that their abdomens had ruptured inside of her,” Kate Hibbett told FOX2.

Hibbett, who has since adopted April, was one of her caregivers at the vet clinic that saved her life.

“All the puppies were already dead. They were decomposing which caused the mama dog to have sepsis,” said Jackie Spiker, of Hope Animal Rescues.

Spiker said she happened to be at animal control with another dog, when Watson was dropping off April.

Hope Animal Rescues set up emergency vet care for April. Two surgeries and close to $7,000 later, the pooch has recovered.

“She did bounce back! She definitely did,” Hibbett said. “She had no life in her. Now, all she wants to do is play, get belly rubs, and eat food.”

“You cannot deny a suffering animal vet care. That’s failure to perform owners’ duties. There is a warrant for her arrest in the city of Alton. We hope to bring her to justice for April,” Spiker said 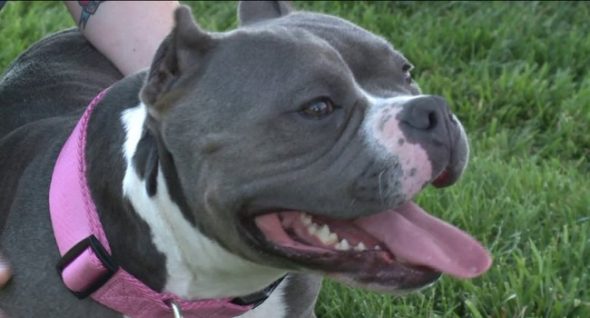 The state’s attorney has charged Watson with failure to perform owner’s duties. It is only a misdemeanor.

“We have damages,” Spiker said, referring to the massive vet bills. “We can ask for restitution. We can be reimbursed, whatever, $25 a month or whatever – forever. But at least she’s being held accountable. That’s what we want to see.”

“There’s no need (to think), ‘Oh this dog is so beautiful, let’s breed it and have puppies,’” Hibbett said. “That’s not necessary. You can go to a shelter and find one just like her. I don’t need to breed her to give you a dog that’s looks like her.”