We would never understand why anyone would think it is okay to throw puppy in a garbage container, let alone tie the dog’s muzzle with electrical tape, but that’s how rescuers found a puppy they’ve named Robbin when they plunged into a metal garbage container to save the discarded dog.

Last month, residents of a Madrid, Spain, neighborhood discovered a young dog trapped inside a garbage container and not being able to rescue the dog themselves, they called authorities to make them aware of the abused animal. 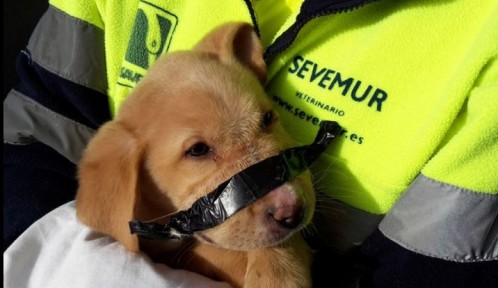 Workers from Sevemur, a Madrid Emergency Veterinary Service, arrived at the scene and were able to rescue the dog.

The pet was transported to an emergency clinic where veterinarians found the pooch suffered from dehydration, diarrhea and a swollen snout. Rescuers also feared the young animal also suffered from other bacterial diseases like parvo, but after running medical tests, no bacterial infections were found in the puppy’s system.

There are no leads on who might have abused and dumped Robbin. Rescue workers just hope the puppy finds a loving forever home in a few weeks when he is given a clean bill of health.