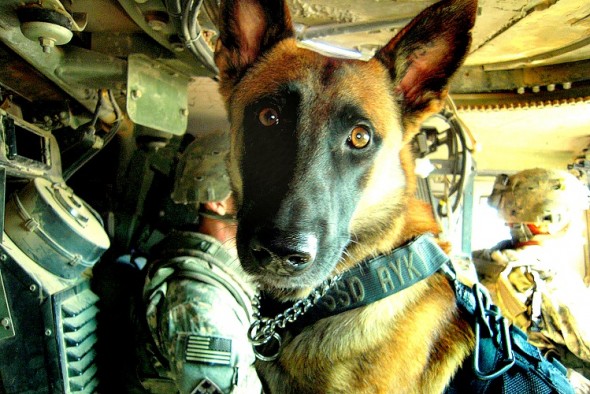 Senators across the country are lobbying for a bill to be passed that would ensure the care of military dogs after their retirement.  Deemed “military equipment,” many are left behind to fend for themselves, but now politicians are pushing for laws that would make it mandatory for them to be brought home, and preferably given to their handlers.

“After all we know about treating debilitating post war conditions, like PTSD and other health afflictions, it makes absolute sense to keep service members joined with their service dogs,” Schumer said. “To know that after all these years, this unresolved issue stands in the way of our veterans and their beloved four-legged friends is unfair and misguided. The federal government has always stood strong with veterans, supporting them and giving veterans the resources to return home and lead productive lives. That’s exactly why Congress should support this cause, because our veterans say it helps; it’s good for them. Here we have a commonsense policy that is good for the animals that give it their all for America – and for the American heroes who love these dogs so dearly.”

Though you may have heard it before it still comes as a shock to think that it’s not uncommon for military dogs to be left behind in the countries where they served, which is a load of crap coming from governments that spend billions of tax dollars on the military budget each year.  Sadly, they don’t spend nearly enough providing for veterans – human and canine – once they complete their service.

Most handlers and other platoon members view their dogs as brethren out on the battlefield, and would love to have the dogs come home with them, but at the very least want them to have a home.

Megan Leavey is one of many veterans who jumped at the chance to have her canine, Rex, come home to her when he was to be retired.  They served together on two very dangerous tours in Iraq, but it took five years for them to be reunited, and they didn’t have much time left.

“Those eight months I had with him, when we got back together, couldn’t have asked for anything better,” she said.

Now at least two senators – Ron Wyden of Oregon and Chuck Schumer of New York are hoping to see a change in the treatment of these important veterans.

“Right now the military says presumption is for the owner not to get the dog unless they fight, fight, fight to get it,” Schumer said.

He and Wyden are pushing to get the Military Working Dog Retirement Act of 2015 passed, which would require the Pentagon to arrange and fund the transport of retired military dogs back to the US.

“The bond between these military working dogs and their handlers is unique,” Wyden said in a statement. “By bringing these dogs that have served alongside our men and women in uniform back to the United States, this bill can provide assistance to veterans while supporting the close bond between these dogs and our soldiers returning home.”