In early July, a tiny puppy was abandoned in the McCarren Airport in Las Vegas, Nevada – accompanying the puppy was a heartbreaking note from his former owner. The Chihuahua, named “Chewy,” had apparently been living with someone in an abusive relationship and the woman feared for the pup’s safety. 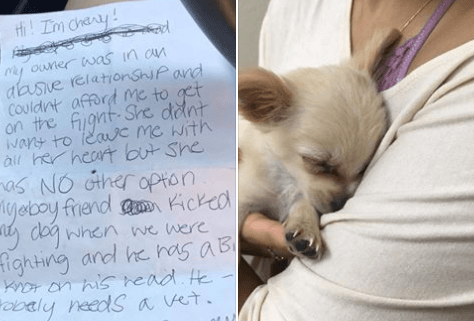 My owner was in an abusive relationship and couldn’t afford me to get on the flight. She didn’t want to leave me with all her heart but she has NO other option. My ex-boyfriend kicked my dog when we were fighting and he has a big knot on his head.

Today, Chewy’s traumatic life is gone and a new life awaits. According to WMUR News, after receiving media attention from across the nation, and a deluge of adoption applications, a new family for the pup has been selected. The identity of the adoptive family is being kept private, at least for now.

The woman who wrote the note which Chewy was found with has never been identified – hopefully she knows that her puppy is now safe and happy.