No attempt at explaining the details of this story can possibly convey the nightmare Deidra Lewis discovered on a West Texas farm earlier in April. But the fact remains that 19 bags of dead dog carcasses were found strewn about the property, along with bleached bones and other animal parts.

Lewis, who runs the West Texas Diamonds in the Ruff shelter, received a tip from someone who first recognized dog bones at Pleasant Farms, according to News West 9. All together, 21 dogs were found dead.

“You thought you’ve seen the [worst] only to drive up on a dead animal dumping ground with carcasses all around you, a random paw scattered here or there. And you think to yourself, ‘what type of society do we live in?’” she posted to Facebook.

The Ector County sheriff’s office was notified, but it is unknown what results any investigation will bring, as Lewis says dumping dead dogs is not uncommon in the county.

While the shock and sorrow Lewis must carry from finding such a mass grave of dogs may last some time, the fact that she found three female dogs at the site and was able to rescue them and clean them up provides a ray of hope.

“We had opted to focus on what we knew would come out of the discovery and that is 3 very much alive, scared, and traumatized little girls,” West Texas Diamonds in the Ruff posted on April 15. “I know these pictures don’t generate the shock and awww factor but they should be the focus in my opinion. These girls need a foster or adopters and they need vet care started. They are shy and it will take a little time for them to come around but through the cowering heads their tails are wagging.” 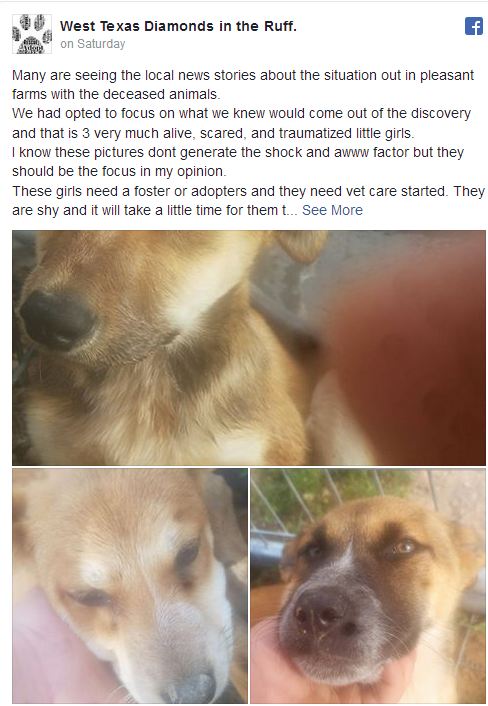 Lewis is focusing on the positive, as well as solutions to the problem, and emphasizing that pet owners should spay and neuter their animals to prevent unwanted litters. The horror of discovering a trove of dead dogs is unspeakably grim, but incidents like this happen in more professional settings as well. Perfectly healthy dogs are euthanized behind closed doors due to overbreeding or simply for convenience, without any attempt to rehome.

A number of efforts are underway to put an end to the practice of convenience euthanasia, and with your help we can send a message to the top veterinarian policymakers, asking them to amend their standards when dealing with people asking to have their pets put down. Click the button below and make difference!