Henry and Edith Meininger are both 92 years old. They’ve had many pets over their years together and were understandably grief stricken when they found Hoku, their beloved 12-year-old golden retriever, lifeless in a roadside ditch.

She’d wandered away from their upstate New York home earlier this month and was struck and killed by a motorist on Route 22.

As they stood by the side of the road, pondering how to handle the situation, they were approached by Trooper Louis E. Godfroy IV.

“What would you like to do with her body?” Godfroy gently asked the griefstricken elderly couple.

They asked if he could take her away; they couldn’t afford to pay someone to bury her on their sprawling property.

“Oh no, you guys aren’t going to hire anyone,” Godfroy said.

Placing the dog in his patrol car, he followed them home, laying Hoku in an old barn before finding a proper site for the burial with Henry Meininger.

“I cannot move very well because I had a stroke and I am 92 years old, so I couldn’t lift her,” Meininger told the Times Union. 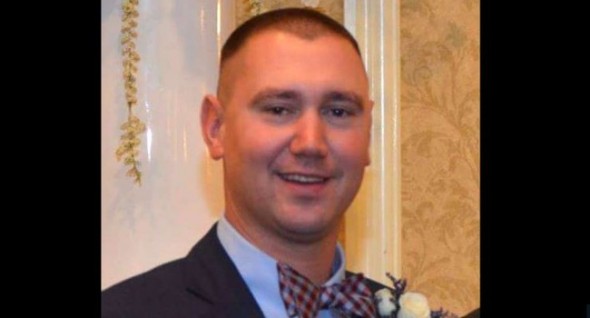 The trooper returned the next day — during his time off — and laid the dog to rest in a former hay field on the 24-acre property.

Godfroy is “just an amazingly wonderful person,” Meininger said. “He was so accommodating.”

Days later, he stopped by to see how the couple was doing in the wake of their loss.

“We talked about how many dogs they’d had over the years, the kinds of dogs,” Godfroy said.

Hoku was “a very beautiful dog, very affectionate,” Meininger said. “The worst part of it, aside from me missing her, is our cat, Nina, and the dog were very good friends. The cat is now very lonely.”

The Meiningers, originally from New York City, had moved upstate to the town of Austerlitz decades ago, Godfroy said. Hoku was the most recent of more than a dozen family pets whose love and company they’d enjoyed over the years.

“I kind of had a connection to these people,” the trooper said, describing his own 3-year-old golden retriever as “spoiled rotten.”

“I’ve lived in Columbia County for almost 50 years and I’m not surprised that people are good here,” Meininger said.

“I didn’t do it for the ‘attaboy’ or the publicity,” Godfroy said. “I felt bad that a nice couple’s faithful friend got hit,” he said.

“I was so flabbergasted. Why would this young man do this? I tried to offer him money but he kept saying, ‘What I want is a handshake,’” Meininger said. “He is a charming young man. I can’t say enough about the trooper.”

Godfroy didn’t even tell his colleagues about burying the dog.

Meininger’s friend posted about him on Facebook and it went viral. Afterwards, Godfroy received a a deluge of texts from his fellow police officers. One said, “That’s what a trooper should be,” while another said, “You’re doing everyone proud.”

The State Police issued a release about the good deed, as well.

Anyone with information on who struck and killed Hoku is asked to call the State Police New Lebanon barracks at 518-794-8445. An investigation is ongoing.