Zeke was found in a roadside puddle back in January when a passing motorist stopped to help him. An older yellow lab, thought to be 10 or 12 years old, he was taken to Voorhees Corner Veterinary Clinic in Raritan Township, NJ, by animal control, then released to the Big Dog Rescue Project rescue following a seven-day stray hold. 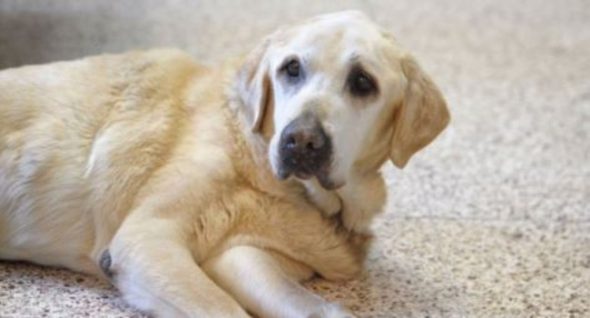 The community’s love for Zeke was immediate and the organization received an outpouring of support for him. An online fundraising campaign raised $2,900 to cover his medical and living expenses and pet food maker Royal Canine provided Zeke with free dog food.

His foster family failed with him almost immediately, so strong was their bond, and they officially adopted him. Zeke, who was so named because of the name’s Hebrew meaning, “God strengthens,” had been gifted with a brilliantly happy, love-filled life post-rescue. 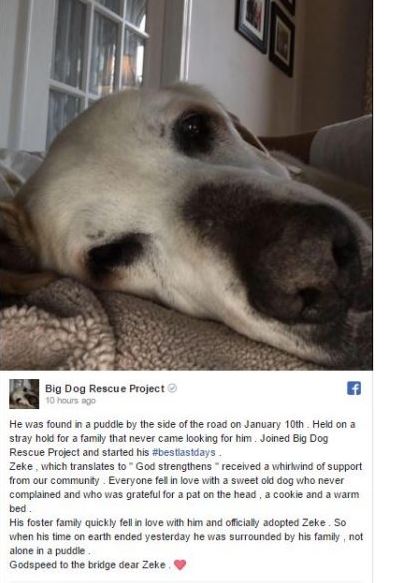 Big Dog Project reported that Zeke passed away last week. He was remembered by those who cared for him and those who support the rescue project. He was even given his own hashtag: #bestlastdays.

“Everyone fell in love with a sweet old dog who never complained and who was grateful for a pat on the head , a cookie and a warm bed,” Mary Jo Conley said. “His foster family quickly fell in love with him and officially adopted Zeke. So when his time on earth ended yesterday he was surrounded by his family, not alone in a puddle.”

“I hope that when we said goodbye today Zeke, you truly knew how much you mean to me and to all of the people who were lucky enough to meet you,” Kristy Lee Linney, a member of the rescue who was among the first to help Zeke, wrote on Facebook. “It was not by accident that we found each other. It was not what I did for you, but what you did for me.

“Thank you for allowing me to love you and thank you for teaching me that love has no measure of time and that even the briefest of encounters has the ability to change everything. I can not wait for the day till I see you again boy, happy, whole and strong. Thank you for choosing me to spend your #bestlastdays with. If I had to do it again, I choose you every time.”