There is nothing scarier than watching your dog get attacked by a hidden predator. Unfortunately, that exact scenario played out for one unfortunate dog owner.

While outside, a nine-week-old puppy was attacked by a python that was hiding inside some bushes. The incident occurred in Slippy Downs, which is a suburb of the region known as the Sunshine Coast in Queensland, Australia.

The dog’s owner managed to capture the entire attack on security footage. In the terrifying footage, the large python is seen emerging from a bush as the little German shepherd/Staffordshire bull terrier mix was making his way around the garden. The owner, Michelle van Schouwen, was inside the home with her daughter when their little puppy was attacked. 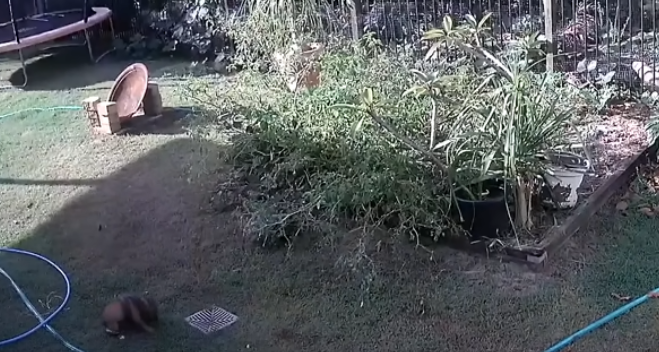 The pup, Jasper, was caught in the serpent’s grasp. Michelle shared with 7NEWS Sydney that she froze upon seeing the giant snake coiled around Jasper. After a moment of shock, Michelle sprung into action and started to beat the snake with what she could find on hand: a cardboard Christmas wrapping paper roll. The snake still wouldn’t release Jasper, so she resorted to grabbing the snake with her bare hands.

She shared her tale with the news outlet, recounting, “At first, it was just that panic. I was just spinning around, and then I noticed Jasper flying through the air, and then instantly my brain kicked into gear and I’m like, ‘oh my goodness, I have to stop.’”

Michelle’s brave actions eventually got the snake to drop its attention from Jasper. The reptile released the little pup from its grasp. And Jasper quickly ran away from the scene. He was okay except for a bite that he suffered on his ear. Thankfully, he’s since recovered from his ordeal. But the experience of it all has left Michelle and her family a little shaken.

She further told 7NEWS Sydney that it has made her think twice about the safety of their yard. She said they wouldn’t have let him outside if they knew there was a snake lurking nearby. Of course, this wasn’t the case and she has noted that they will often check outside to make sure that the coast is clear for their pooch to wander around in the yard.

As the Queensland Government has shared, these carpet species of pythons are known to grow as large as 13 feet in length. And because they’ve got olive-brown scales, they’re adept at camouflaging themselves really well. These snakes are most active during the night time and they are known to eat small animals like rats, possums, and birds. And apparently, they’ll even chance a puppy! Luckily for Jasper, his owner was able to save him!