Rio was expecting. And impending puppies are exciting enough without one of them coming out in an astonishing shade of mint green! 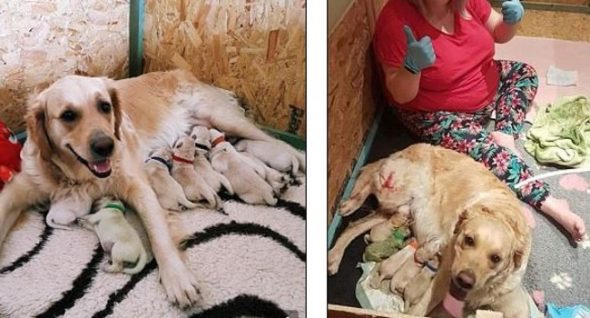 The litter of nine golden retrievers are healthy, squirmy little things but one of them, a pup owner Louise Sutherland, of Golspie — a town in the Highlands of Scotland — has now dubbed Forest, was a lucky shade of shamrock!

Think it seems like a hoax? Many do, but it’s actually entirely possible — though rare. There have been other cases where a puppy becomes exposed to a substance called biliverdin, which is found in the placenta. It is not harmful and generally the color fades in about two weeks’ time.

The video below features the owner of a pup born with the same condition; they named her Princess Fiona.

The substance can stain the puppy’s coat when it mixes with the amniotic fluid in which the pup floats while en utero.

“…As the puppies started to arrive,” Sutherland told we noticed that one of the puppies had green fur! We couldn’t believe it.

Louise has managed to find good homes for all the puppies but is planning to keep Forest for herself.