The search has continued for the goldendoodle, who is believed to have run off, disoriented, after experiencing a seizure, and while tips have come in that have guided the search, Ozzy is still missing and the family is suffering.

Desperate for the dog she was assigned in 2015 — after Bilyou returned home from Afghanistan where she served as a combat photographer for the Army National Guard and was diagnosed with post-traumatic stress disorder and a brain injury that prompted balance problems — her search for Ozzy has not been entirely fruitless.

Ozzy went missing on a day Bilyou was home, mostly in bed, dealing with one of her frequent migraines. In the early afternoon, she rose to take the family’s other dogs, two corgis, outside. As she was gardening, Ozzy began to shake. Frightened, he jumped the fence (which was high enough to reign in the corgis; Ozzy is well trained, he had never attempted to jump it before) and collapsed in the road.

Before she could reach him, the terrified dog took off.

Bilyou’s son, Matthew, 22, admits he didn’t realize how much Ozzy helped his mother until he was gone. Her migraines are debilitating; they often make her bedridden. 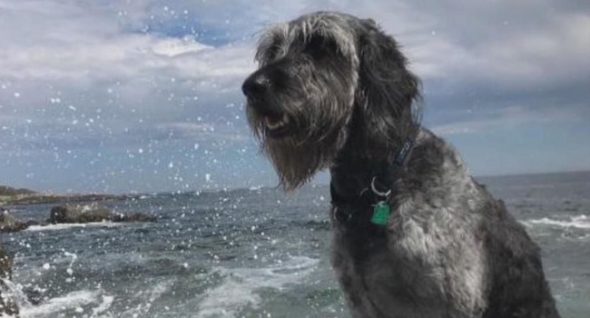 “I thought she didn’t need him, but after he left, it got bad,” Matthew Bilyou told WXIA-TV. “It was like she was reverting back to the way she was when she first came home.”

Bilyou has spent upwards of $7,000 on the search on flyers and setting up dog-feeding stations with cameras county-wide.

They have a cheap cell designated just for the search. They dubbed it “the Ozzy phone.”

“I’ve refinanced my house. If I hadn’t done that, I wouldn’t have enough to spend on finding him,” Lori Bilyou said.

“We were all willing to do it because we’ve got to,” he said. “My mom physically needs him. It’s a lot of work and money for a dog, but not for a medical necessity.”

Family and friends have helped look for Ozzy, and they have made a Facebook page: Bring Ozzy Home.

“People are so dedicated to stick with it,” Lori Bilyou told reporters. “Like this one guy said he drove around 45 minutes to find a flyer and call us. He really wanted to help.”

Though she’s still holding out for her own dog, she is happy to have helped other families find theirs.

“I like to think that Ozzy is collecting up all the strays before he comes home,” Lori Bilyou said.

Anyone who spots a dog they think is Ozzy is asked to take a photograph and send it to the number on the Facebook page (302-765-8694). They’ve been tracking sightings and believe the dog is headed south, near the Bear, DE, area.

Matthew Bilyou said there are no plans to call off the search.