Hallee Fuqua has been asking her parents for a dog for Christmas for years. But every year she received a “no”. So, the Oklahoma college student decided to channel her love of dogs into volunteer work at the Humane Society of Stillwater.

Well, this year, Christmas came early when her parents decided she had been waiting long enough.

But they didn’t just surprise her with any dog, they surprised her with the shelter dog she had been caring for and fallen in love with.

That dog was named Rambo. Rambo is a 2-year-old Plott Hound mix. 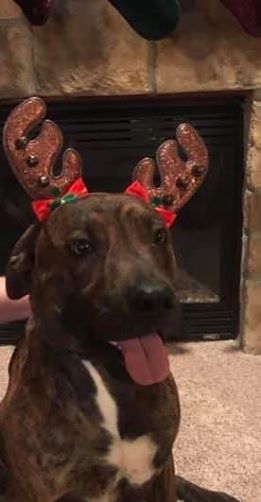 When Hallee learned that Rambo had been adopted she was very upset, unaware it was her parents who had adopted the dog for her!

Lance Fuqua shared the full story on Facebook and wrote:

So, here’s the story. Our daughter Hallee Fuqua has been asking for a dog for Christmas for years. We told her she should wait until after she graduates college. She began volunteering at the Humane Society of Stillwater. She fell in love with a dog named Rambo and visited him often. My wife and I decided to secretly adopt him 3 weeks ago. With the help from the Humane Society we kept it a secret.
She found out this weekend that Rambo had been adopted and she was broken. So Sunday night we surprised her with her early Christmas present.”

In the video, Hallee immediately begins to cry when she sees her dad with Rambo, wearing a reindeer antler headband.

It wasn’t and now Rambo is a full-fledged member of the family and it just seemed meant to be. “Hallee kept sending us pictures from her and Rambo at the shelter,” Lance told PEOPLE. “After a while my wife, Jessica, said ‘I know this sounds crazy, but I think Rambo belongs in our family.’”

The couple planned the surprise in advance, having arranged with the shelter to adopt the dog in late November. On December 14th, Hallee heard the news she was dreading, but less than two days later her sad tears turned to ones of joy when she saw Rambo on her doorstep.

If you have any trouble viewing the video above, try the one below.