Chester, a Pit Bull that spent over five years at a New York shelter, finally found his forever home thanks to social media and the creative thinking of one shelter worker. 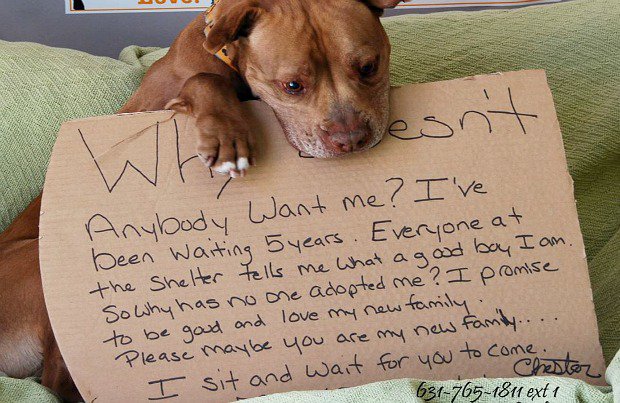 According to Metro UK, the 6-year-old pooch spent nearly his entire life at the North Fork Animal Welfare League in Long Island. Year after year, Chester saw other dogs leave the facility with new families, but he remained, hoping for a home.

Shelter manager Gabby Stroup decided to take to Facebook with a special plea in hopes of finding Chester the family he deserved. She snapped a photo of the light-brown Pit Bull with a sign that read, “Why doesn’t anyone want me? I’ve been waiting 5 years. Everyone at the shelter tells me what a good boy I am. So why has no one adopted me?”

The picture features Chester’s best puppy-dog eyes and tugged on the heartstrings of animal lovers all over the country.

The picture was shared over 20,000 times and the shelter received inquiries from far-away states including North Carolina, South Carolina, Mississippi, Michigan and Oregon.